The Daily Nexus
News
Bestselling Author Speaks About Life and Business
May 8, 2014 at 8:45 am by Emani Oakley 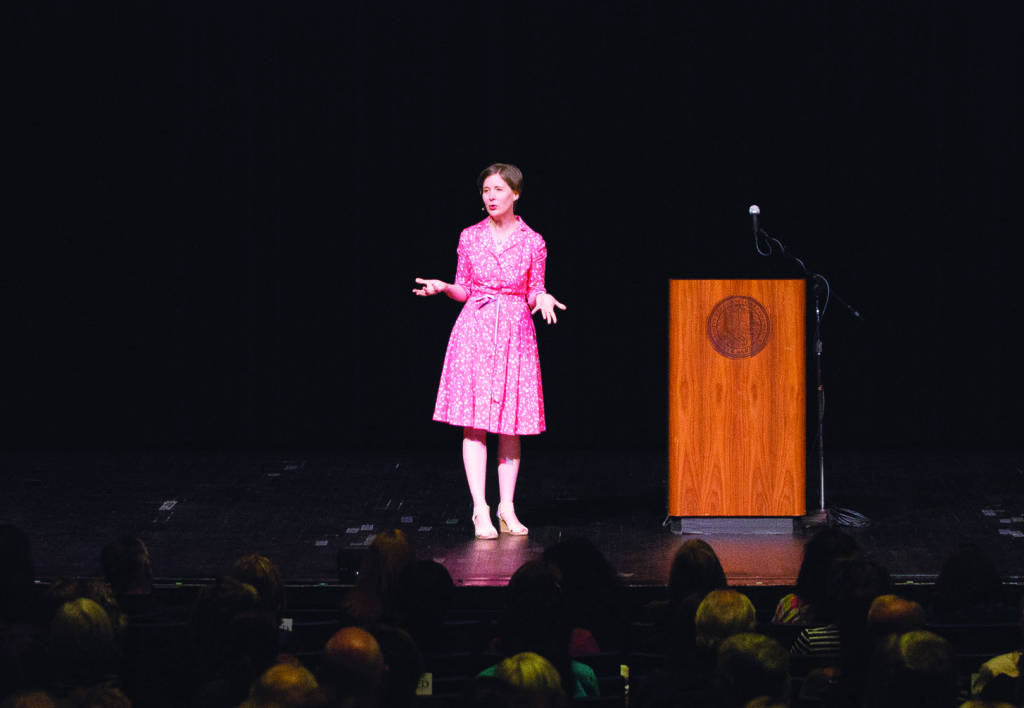 New York Times bestselling author Ann Patchett spoke at Campbell Hall Tuesday night to discuss the therapeutic aspects of writing and her mission to open an independent bookstore in her hometown of Nashville, Tennessee.

Named by Time as one of 100 Most Influential People in the World, Patchett is the author of bestselling books such as Bel Canto and State of Wonder and has had work published in outlets such as Vogue and GQ. As a recipient of the prestigious Guggenheim Fellowship, she has received many literary awards such as the American Bookseller’s Association’s “Most Engaging Author Award” and the Women’s National Book Association Award. The free lecture, sponsored by UCSB Arts & Lectures and supported by the Harold & Hester Schoen Arts & Lecture Endowment, featured a Q&A session later in the evening.

Her latest venture has been opening Parnassus Books, an independent bookstore in Nashville, Tennessee, as well as releasing her most current work, This Is the Story of a Happy Marriage, a memoir about her family, friends and career.

During her lecture, Patchett spoke about how she collects clippings from her articles published in outlets like the New York Times and puts them in a plastic bin that she keeps in her closet. This process of finding, clipping and storing the pieces gives her a healing feeling of comfort and release, she said.

“For those of you who aren’t writers, I don’t know how you do it,” Patchett said. “I don’t know how people carry all of the experiences of their life. It’s like shedding leaves or something for me to be able to think about the process of writing and put it in a bin.”

Patchett also discussed her opening of the independent bookstore, Parnassus, in her hometown of Nashville, Tennessee. The city’s last two bookstores closed in 2011, leaving Nashville without any bookstores at all. Although initially reluctant, Patchett said she knew she had to take action after many failed attempts of the local community to create a book cooperative.

“I went to Catholic girls’ school, and the nuns had taught me that if you could formulate the thought in your mind, then it was your job,” Patchett said. “This was my job.”

A few months later, Patchett opened Parnassus Books with business partner Karen Hayes, and she said the store was meant to be a gift to her city.

According to Patchett, one of her favorite parts of owning Parnassus Books is that she is able to make book recommendations. As an owner, she also holds the responsibility of controlling what books are and are not sold within the store’s walls.

In light of Nashville’s bookstore dilemma — one experienced across the nation, as print continues to go out of style — consumers have a duty to keep independent stores running, Patchett said. While saying online bookselling markets like Amazon have multiple benefits, she said people “need to be reminded of what we cherish” in the communities they are “responsible for supporting.”

According to Arts & Lectures Associate Director Roman Baratiak, Patchett was brought into the spring lineup of Arts & Lectures events because of the quality of her work and her advocacy for bookstores, which are increasingly absent from cities across the nation.

“Ann Patchett is an iconic American writer with a devoted following and also a champion for independent bookstores, which have been under siege from online giants like Amazon and, until recently, large chain stores like Borders and Barnes & Noble,” Baratiak said in an email.

In regard to reading her past writings, Patchett said looking at works that have already been published is like “being naked.”

“I can’t read my own work, and I’ve never read any of my books,” Patchett said. “By the time a book gets to a place where I can’t make any changes, I never want to see it again.”

According to Patchett’s publicist, Trinity Ray, Patchett is highly committed to the promotion of literature and book appreciation. Because of this, Ray said Patchett focused a large part of her lecture on informing students about the importance of supporting independent bookstores.

“This is why she opened her bookstore, Parnassus, in her hometown of Nashville, and this is why she lectures around the country whenever she can,” Ray said in an email.

“When you come into my store, you get a very true answer from different people who will remember you, and that’s what we’re all about,” Patchett said.