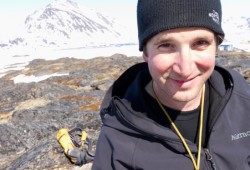 Scientists tested beryllium-10 isotope levels in samples recovered from 3,000 meters below the ice.

Scientists were recently shocked to discover an ancient tundra located two miles below the Greenland Ice Sheet, where glaciers are typically known to obliterate anything and everything in their path, including soil, vegetation and top bedrock layers.

The group of researchers began drilling into the 10,019-foot GISP2 ice core in 1993 and discovered organic frozen soil that has resided at the bottom of the ice sheet for an estimated 2.7 million years. After analyzing ice samples from the bottom of the sheet, scientists concluded that the soil had been exposed to the surface for up to one million years. Their findings are published on April 17 in the journal Science.

Dylan Rood, an assistant researcher at UC Santa Barbara’s Earth Research Institute, was a co-author on the paper, “Preservation of a Preglacial Landscape Under the Center of the Greenland Ice Sheet.”

Paul Bierman, a geologist at the University of Vermont and co-author on the paper, said that Greenland’s landscape provides a rare environment for learning about earth’s history — and potentially its future.

“[Greenland] has a unique set of samples,” Bierman said. “It is one of the few places that people have cored throughout the ice sheet to the bed.”

Greenland has been a hot topic in recent climate debates due to its massive ice sheets the size of Alaska, which are melting at an alarming rate and contribute to the rising sea levels. This is expected, as most glaciers are thought to erode during periods of climate change.

Yet Bierman and Rood’s discovery provides evidence that the glacier is in fact firmly rooted to the ground and has been for several millions of years, through both ice ages and periods of warming.

“It was exciting and unexpected. We didn’t think we’d find much,” Bierman said. “We only figured the ice would have eroded away any old soil.”

Bierman said that the ice sheets did not fully melt during warmer periods, explaining why soil was still stuck to the bottom of the ice sheets.

“The pre-ice sheet tundra reflects a time in Earth’s history when it was warmer than today,” Bierman said.

To test how long the hidden landscape was once exposed, scientists extracted the rare isotope beryllium-10 from 17 ice samples taken from the bottommost depths of the glacier.  Beryllium-10, with a half-life of 1.39×106 years, is created by cosmic rays from the atmosphere and clings to visible rock and soil on Earth’s ground.

The longer that soil is exposed on the surface, the more beryllium-10 collects on Earth’s ground. Researchers expected to find small amounts of beryllium-10 from the “dirty ice” samples because they had not been exposed for the past three million years.  When the samples were taken to Lawrence Livermore National Laboratory in Northern California, however, the researchers discovered high concentrations of the isotope.

From these samples, scientists and geologists were able to estimate that the soil beneath the ice had been exposed for some 200,000 – 1 million years, suggesting that temperatures were in fact much warmer. The findings point toward a forested tundra that once flourished before the glaciers enveloped the landscape.

According to Bierman and his colleagues, evidence for historical stability in the ice tundra does not indicate that it will maintain its rigidity in the rapidly warming climate we are facing.

“We have dramatically altered atmospheric makeup and changed the energy balance of our planet,” Bierman said. “This will change the climate system and lead to overall warming as more heat is trapped on Earth.”

The tundra that is predicted to have been underneath the ice glaciers is similar to the permafrost tundra currently found in Alaska. To confirm the findings from this research, geologists measured the levels of beryllium in the soil of the North Slope of Alaska. The similarity of the results confirmed that there was, in fact, tundra soil located under Greenland.

These findings help shed light on the current global warming crisis.  It is predicted that if all of the ice glacier sheet were to fully melt, the sea levels would increase by 23 feet.  Though this has not happened since humans began roaming the earth, the current pace at which the glaciers are melting is truly alarming.
As Bierman points out, once the ice melts, it is difficult to restore.

“Global climate change is human-induced, there is no question. The pre-ice sheet tundra reflects a time in Earth’s history when it was warmer than today. The climate has generally cooled since [and] now we are warming.”