The Daily Nexus
News
Gang Injunction Trial Begins
May 7, 2014 at 5:00 am by Peter Mounteer and Simone Dupuy

Superior Court Judge Colleen Sterne will decide the fate of the 11 alleged gang members included in the injunction, which would prohibit them from entering designated “safety zones” within the City of Santa Barbara, having contact with other gang-affiliated individuals, using gang signs in public and making any contact with minors going to and from school. Proposed safety zones would cover large areas of downtown Santa Barbara, including much of the waterfront area, virtually all of Santa Barbara’s public parks and schools and the Eastside and Westside of Santa Barbara City. The trial is scheduled to last at least 10-15 days.

As the City Attorney’s office is the plaintiff in the case, Assistant City Attorney Tom Shapiro delivered the opening remarks, saying Santa Barbara has dealt with gang activity for over three decades, and the City must find a way to resolve it.

“This isn’t about throwing gangsters in jail,” Shapiro said. “This is about real relief.”

Although the proposed injunction once named 30 defendants, further investigation led to the list being narrowed down to its current 11 defendants. The change shows how faulty conclusions regarding the innocence or guilt of the defendants have already been made, according to Marissa Garcia, member of a local nonprofit opposed to the injunction called PODER, or People Organized in Defense and Equal Rights.

“The city has claimed the thirty named individuals are the baddest of the bad, yet they were unable to gather evidence against the nineteen,” Garcia said, reading from a statement. “This is one of our biggest concerns because this is a clear example of risky false identification when identifying so-called gang members.”

In the coming days, the defense is expected to present testimony from current residents of the proposed safety zones advocating for the city’s safety, which the defense claims is presently sufficient.

Testimonies from alleged gang members are also expected. Attorneys with the defense said they plan to prove that, given the decline in Santa Barbara’s crime rates, along with the city’s existing “tools” to maintain safety, the proposed injunction is not necessary. The defense argued that an injunction is too extreme for Santa Barbara’s current level of criminal activity.

“An injunction is an extraordinary measure and should be used as a last resort,” Defense Attorney Tara Haaland-Ford said. “The toolbox is full; the toolbox is in working order.”

During the opening arguments, Shapiro laid out the plaintiff’s plan to present evidence and testimony over the course of the trial that largely addressed the criminal activity among the Eastside and Westside gangs. Thousands upon thousands of police records will show criminal gang activity ranging from homicide to breaking curfew, Shapiro said, adding that an injunction would successfully tackle this crime.

The defense argued that the injunction, if put in place, would have a one-year effect of three-to-six fewer crime reports at best. Additionally, defense attorneys also said the proposal would strip defendants of their constitutional rights to free movement, association and speech.

However, Assistant District Attorney Hilary Dozer said the gang injunction is necessary to address the concerns of individuals living in areas affected by gang activity.

“Reasonable minds can differ on the necessity of a gang injunction, we feel it is the appropriate response to those people in the neighborhood who feel threatened by gang activity, who have their quality of life impacted by gang activity and need to be left alone by those gang members who prey upon them in those neighborhoods,” Dozer said Monday.

Santa Barbara City Councilwoman Cathy Murillo, who voted against defending the injunction in a city council meeting last month, said she thinks the proposed injunction is unnecessary given the effectiveness of existing parole and probations mechanisms used to curb gang activity.

“Probation … and parole … are really restrictive programs; they watch you like a hawk, they can stop your car and search it, so I think those are sufficient control mechanisms compared to what the gang injunction would do,” Murillo said Monday. “I live on the west side in the safety zone … and I can tell you that I’m not afraid to walk on my street on the Westside — I’ve never been bothered by a gang member.”

Defendant Pedro “Oso” Garcia said in a statement at a PODER press conference Monday morning, the injunction penalizes defendants unfairly and does not take into account the capacity for change among the defendants.

“People think that because we have tattoos and committed those crimes while we were all underage that we are still the same person we were back then, but people grow up and mature,” Garcia said, reading from the statement. “We can’t judge who we are now because a lot of what we were back then. Everyone deserves a second chance — why are we any different?”

As a defendant in the case, Garcia said he has a lot to lose if the injunction is passed.

“I want to be a father to my kids, not to be restricted in the areas where I won’t be able to take my kids to the park or to the beach or, you know, even pick them up from school or even take them to school,” Garcia said. “I’m fighting here for my freedom to go wherever I please with my kids.”

PODER member Phillip Rendon said the injunction punishes an entire community of Santa Barbara residents for the actions of a few individuals a long time ago.

“Why should a whole community be punished because a few people make a mistake, and why should one mistake, or a couple mistakes, dictate that a person’s entire life should be thrown away?” Rendon said Monday. “These are our children, this is our bloodline, this is our legacy. Do we want to leave a stain on our legacy of oppression?”

“We need to look at the current [crime rate] trend as one where police officers are having a significant effect on crime rates without the injunction,” Morse said. 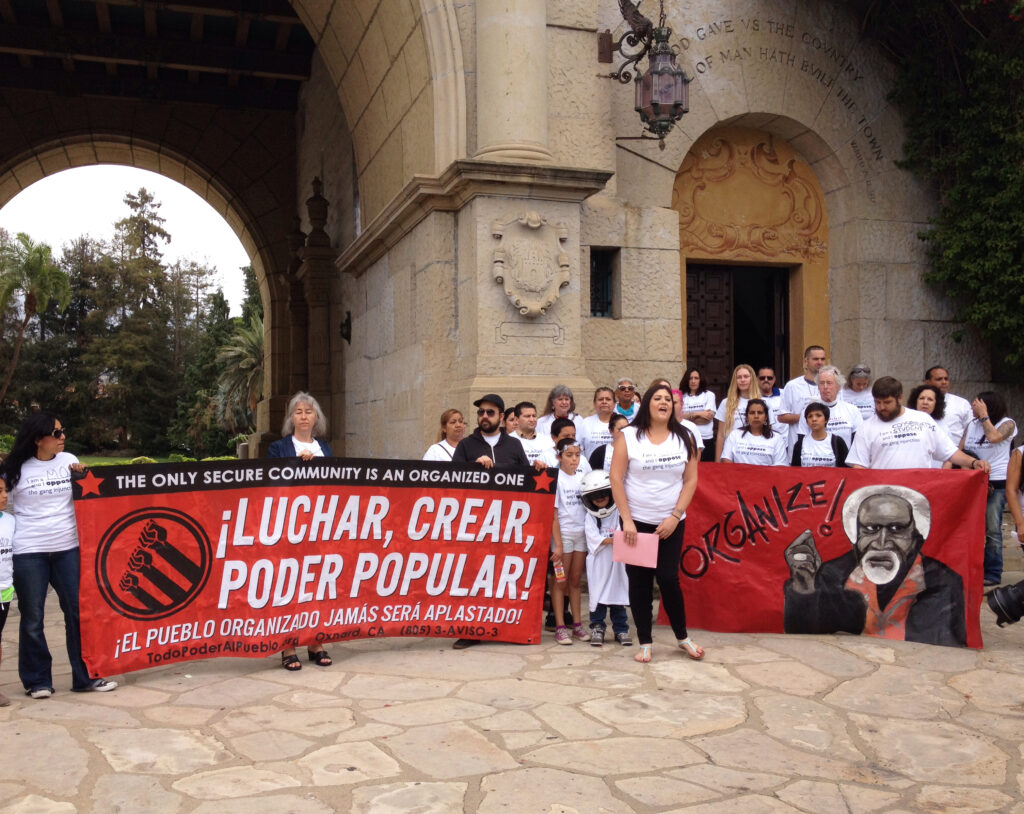 Advocates of PODER gather outside the courthouse rallying against injunction. The proposed injunction was narrowed down from 30 defendants to 11 as new information was presented.

Correction: The lede originally stated that the prosecution delivered opening remarks. However, as a civil case, there is no prosecutor, but rather a plaintiff. The article has been updated to reflect this.

A version of this story appeared on page 1 of Wednesday, May 7, 2014’s print edition of the Daily Nexus.