Hundreds of people attended the Chilla Vista Music and Arts Festival at People’s Park and Perfect Park in Isla Vista on Saturday to soak up the day’s sun and immerse themselves in a flurry of free food, games and activities and performances by local bands.

Featuring music by a series of musical groups — including headliner FMYLYBND, That’s What She Said, Alright Alright, The Olés and The Fire Department — the annual festival was organized and sponsored by Associated Students Isla Vista Community Relations Committee and invited attendees to vote on a mural for the A.S. Pardall Center.

“Chilla Vista was started as a way for various communities to come together and celebrate the art, culture, and unique Isla Vista community as a whole,” Bayon said.

Rather than mostly catering to students and businesses, as the event usually does, Bayon said this year’s event drew focus to broader Isla Vista audience, particularly lesser represented residents such as families. Additionally, she said this year’s event returned to its roots of “community-building and activism.”

“We really wanted to highlight the wonderful community Isla Vista has from the kids who participate in the I.V. Teen Center to the community work the Isla Vista Food Co-Op does,” Bayon said. “For the first time, IVCRC hosted a Kid’s Corner for the children in our community to make arts and crafts.”

Co-Chair of A.S. Community Affairs Board Kaitlyn Christianson, a fourth-year political science and history double major, said the event has grown over time and become more student-organized every year.

“Chilla Vista started a little over a decade ago by community members who wanted to allow Isla Vistans to display their artistic and musical talent,” Christianson said. “A few years after its inception, Associated Students became the main planner and the event has gotten bigger from there.”

Comparing the creative spirit of the humble event to famed festivals elsewhere, first-year biology major Angie Kelly said Chilla Vista brought out another side of I.V.

“It was nice seeing the rest of Isla Vista that wasn’t just college students,” Kelly said “It was like a small Coachella.”

This year’s Associated Student’s committee was more selective in choosing student groups to participate in the event, Bayon said, as they opted to showcase those who were “highly invested in the Isla Vista community building and sustainability.” Such groups include I.V. Youth Projects and A.S. Recycling, amongst others.

“We also had the Isla Vista [history] class based in the sociology department at UCSB hosting educational tables about Isla Vista, such as issues like gentrification or culture such as the I.V. environmental movement,” Bayon said.

Garrett Harris, fourth-year history major and Chilla Vista volunteer for the History of Arts and Murals attraction, said the murals add to the unique character of Isla Vista and has “made constantly changing art which exemplifies each generation’s ideas.” 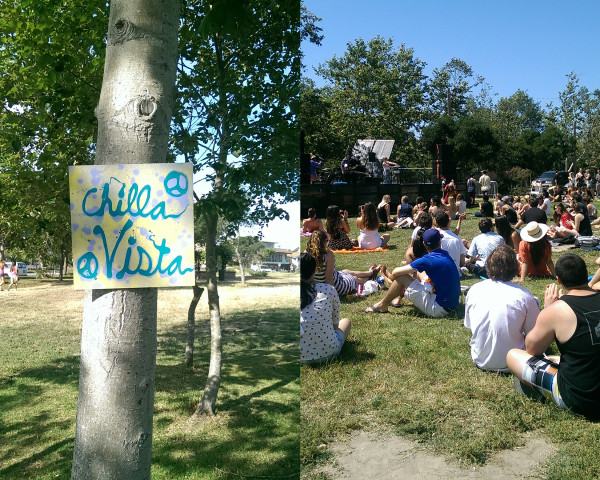 A version of this article appeared in the Monday, May 5, 2014 edition of the Daily Nexus.