The Daily Nexus
News
A.S. Votes Against Divestment from Israel
April 25, 2014 at 5:00 am by David Jackson

After an intense nine-and-a-half hour meeting, the Associated Students Senate voted not to pass a resolution to “Divest From Companies that Profit from Apartheid” in a secret ballot, with 8 supporting and 16 opposing.

Hundreds attended and nearly 100 students and community members spoke at public forum to voice opposition or support for the divestment legislation, which focuses on divesting from five Israeli companies that the University works with. The meeting was held at Corwin Pavilion to accommodate the large crowd expected due to last year’s divestment hearings, during which Senate meetings ran well into the early morning several weeks in a row before the resolution was ultimately struck down.

Though sign-up for speaking at public forum closed at 8 p.m., senators decided to end public forum at 1 a.m. before completing the list of those scheduled to speak. Bill co-authors fourth-year Middle Eastern studies major Hani Tajsar and fourth-year Middle Eastern studies and political science major Katlen Abuata of Students for Justice for Palestine then read through the entire ten-page resolution in an attempt to clarify misunderstandings about the bill and answer questions from senators.

Senators agreed to end debate at 3:33 a.m., at which point they held a vote to use a secret ballot on the resolution in an effort to protect senators from possible repercussions for their choice. The secret ballot went forward with the support of Internal Vice President Kyley Scarlet, who provided the tie-breaking vote.

The following ruling against divestment resulted in emotional demonstrations on both sides of the audience, which remained around 200 people. The crowd dispersed shortly after the announcement.

The meeting continued until 4 a.m., allowing senators to briefly discuss and vote on a controversial bill to withdraw A.S. membership and funding from the United States Student Association. The resolution narrowly failed, meaning UCSB will continue its paid membership with USSA.

Barbara Parmet of the Santa Barbara Chapter of Jewish Voice for Peace read a letter from the organization’s deputy director defending the use of the word “apartheid” in the resolution.

“Israeli policies have already created a de facto single state, including all of Israel, the West Bank, Gaza and Occupied East Jerusalem into one state built on the premise of separate and unequal lives for Jews and non-Jews,” Parmet said. “This is the very definition of apartheid.”

Parmet also said a stark socioeconomic and military contrast has been struck between Israel and Palestine that needs to be acknowledged.

“Israel has one of the strongest militaries in the world — the only nuclear arsenal in the Middle East and the unconditional backing of the world’s sole superpower,” Parmet said. “Meanwhile, the Palestinians across the table remain stateless, impoverished, occupied or second-class citizens inside Israel.”

However, Rabbi Evan Goodman of Hillel Santa Barbara said he opposed divestment on the grounds that it would not promote communication or facilitate peace.

“Will it bring peace this much closer for Israelis and Palestinians? No, it will not,” Goodman said. “Will it make our campus this much more of a place where people can get along, engage in dialogue and have a civil climate? No, this one-sided resolution will not.”

Division over the resolution took on a physical element as advocates and opponents of divestment concentrated on opposite sides of the room, in apparent solidarity with their respective camps. Andrew Farcast introduced himself as an Israeli Jew and described his family’s history being persecuted by the Nazis during the Holocaust, before calling on audience members to practice empathy when considering the resolution.

“To my Israeli and Jewish brothers and sisters against this resolution: We cannot stand any longer for our money to fund home demolitions, bombings, theft of water, theft of land,” Farcast said. “Learning and being open to people’s suffering makes you much safer than any wall, any concrete, any required military service. But if you refuse to learn, you’re not actually making yourself or anyone safer.”

Liran Braude, who grew up in South Africa under apartheid and served as a member of the Israeli Defense Forces for three years, said he found it insulting that the two unique political situations were compared with one another during the meeting.

“While I find myself in the unique position of having grown up in apartheid South Africa and of having lived as an infantry soldier present in Israel, [the divestment bill] is an insult of the highest order — not only to Jews and Israelis, but mostly to the South Africans of color that actually suffered under apartheid,” Braude said.

Kristian Bailey, a comparative studies in race & ethnicity major from Stanford University, said the discussion brought up issues resurfaced due to the cyclical pattern of history and that student senators had an opportunity to participate in a push for social progress.

“What you’re seeing before you is the cycle of history repeating itself — just in different issues,” Bailey said. “And you have the chance, as students, to participate in a movement for freedom, for justice, for liberation, and I urge you to look into it.”

Although speakers on both sides delivered impassioned pleas throughout the evening, no major altercations broke out and Community Service Officers present did not need to intervene. 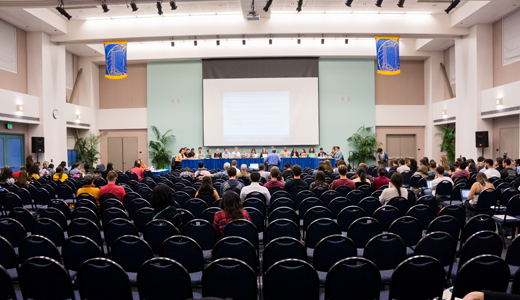