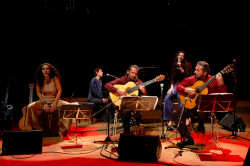 The Assad Family performance on our campus last week was the concert of my dreams.

I could have stayed and watched the band — which performed at Campbell Hall in a show presented by UCSB Arts & Lectures on Wednesday, April 9 — listening for days without want of food or rest, in full satisfaction of the musical treat that was offered.

The family is originally from Brazil, though many of them currently live elsewhere in the world. Each member has his or her own professional life, mostly in music. The musicians expressed that this tour, which ended at our own Campbell Hall concert, was one of the rare moments when all of them were present in the same room. Being that it was their final night together, it made for a very riveting concert, full of celebration, love and bittersweet grace.

The core members of the group are the Assad brothers. Odair and Sérgio Assad have been playing together as a guitar duo for many years, making their international debut in 1979 at a competition in Bratislava. Their extensive repertoire spans genres such as jazz, various folk musics, Western classical music, Latin music and, of course, many styles of Brazilian music. Composers such as Astor Piazzolla and Terry Riley have written pieces for the brother as well. Additionally, the duo performs original compositions.

Having such breadth of stylistic ability has allowed their virtuosity to evolve in an unprecedented way. Because their masterful skill is not limited to a specific tradition, their depth of expression breaches cultural boundaries and allows for an absolutely thrilling and unique musicality. Nobody else in the world sounds like the Assad brothers.

Joining the duo in this musical family reunion were Sérgio and Odair’s younger sister, Badi Assad, Odair’s daughter, Carolina and Sérgio’s daughter, Clarice. Each performer brought vibrant energy to the stage. Throughout the concert the ensemble took turns in performing with various combinations of musicians. After a few gorgeously realized pieces by the Assad brothers, Badi took the stage for some solo music.

Badi’s older brothers already had careers by the time she began playing music, and so this led to a necessary development of a different kind of musicality than her brothers’. While she still plays guitar, Badi is also an extraordinary percussionist and vocalist. The way she expressed her music was so liberated and uninhibited, ranging from throat singing, impeccable rhythmic scatting, oralization of nature sounds and sexy guitar grooves.

She was then joined by her nieces, vocalist Carolina and vocalist/pianist/composer Clarice. Each woman had such a unique sound, and yet their blend was as smooth as merlot with a delicate chocolate cake.
Later on, Clarice played a virtuosic and enthralling improvisation that featured traditional Brazilian rhythms interwoven into lush harmonic textures and an edgy spirit. The concert ended with the whole family in full force, in a few invigorating samba tunes.

Performances like this one are gems of existence. We were in a bubble of bliss that night, the musicians and audience alike, confiding in each other to create this shared secret of musical elation. The musical excellence that the performers brought both individually and collectively was catalyzed in this performance by their openness and amiability. It was an evening of timeless charm and unforgettable brilliance.

A version of this story appeared on page 8 of Thursday, April 17, 2014′s print edition of the Daily Nexus.