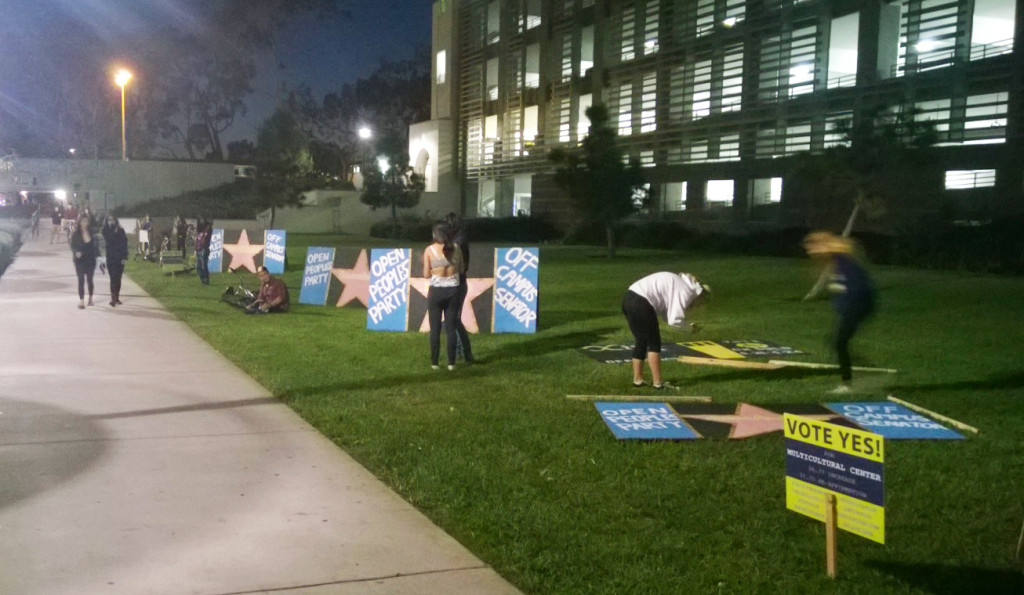 UCSB will become a political battleground for the next two weeks, as active campaigning for this year’s Associated Students elections began yesterday and will continue until the results are released late next Thursday.

The period allowed for campaigning started at 8 p.m. last night, with members of the competing Open People’s Party and Democratic Process Party putting up signs along bike paths and advertising their campaigns on Facebook. The candidates for each position have also been revealed, and OPP’s Ali Guthy will run against DP’s Navi Kaur for A.S. President. Voting will begin next Monday and will take place through GOLD.

“Week seven or eight [of Winter Quarter] was the official declaration of candidacy. That’s when everyone was aware,” Singh said. “It wasn’t completely public yet, but that’s when the whole filing process was, and a week later, that’s when they officially announced the eligible candidates for A.S.”

“Every senator that has a board has put it somewhere on campus,” Kwok said. “That’s how we’re doing it now. It’s basically a free-for-all, so if you get that spot, you claim that spot.”

Third-year psychology major and chair of the A.S. Elections Committee Claire Fox said her organization is in charge of ensuring that the entire elections process is run in a fair and efficient manner. According to Fox, the elections code includes rules ranging from GPA requirements for candidates to the maximum number of organizations allowed on campus, and students are often the ones who report violations.

“Students tend to make complaints if they feel there has been a violation with the elections code, and we make a determination and contact the candidate who has been charged or just assess the situation,” Fox said.

Fiona Hayman, a first-year political science major and voting member on the A.S. Elections Committee, said these next two weeks could be hectic due to the intensity of the campaigning and number of complaints submitted.

“We’ve received some complaints, but pretty much this week is when campaigning starts, so the complaints will start to roll in, and we’ll be dealing a lot with that,” Hayman said. “The craziness starts now.”

Fox said the forums being held this week in The Hub will be a good way for students to learn about each candidates’ platforms.

“If [students are] really concerned about lighting in I.V., they can ask the candidates what their plan is for that,” Fox said. “It’s good to be an informed voter, and the forums really help with that.”

According to Hayman, next Thursday will be an exciting night full of emotion, as each candidates’ campaigning efforts will come down to either a win or a loss.

“After [the elections], there’s results night, which is celebratory for some, very sad for some, so that’s an exciting time. And then, it’ll calm down for us.”