The agreement, which includes a four-year contract covering over 8,300 UC service employees, was reached Thursday. After several months of protest and negotiations, the union is now calling off of a system-wide strike that was planned for this week. AFCSME 3299, which includes over 20,000 employees across all 10 UC campuses and five medical centers, has been in conflict with the UC for wages, working conditions and the contracting out of jobs for service and patient technical care workers since June 2012.

AFCSME 3299 Spokesperson Todd Stenhouse said the new agreement between the union and the UC is “historic,” as it addresses contracting issues not previously addressed by the University’s employment policy.

“Finally, last week, we secured a tentative agreement to provide fair wage increases for those workers as well as critical and first-time protection against the contracting-out of service work,” Stenhouse said.

Stenhouse also said current UC workers have faced multiple problems due to outside contractors coming in to work within the UC.

“[It] puts more workers on public assistance because of UC’s reliance on low-wage contractors that don’t pay any benefits,” Stenhouse said. “[These] outside contractors tend not to have the same experience as career UC workers, especially when it comes to dealing with hazardous materials, as many of them do.”

According to Stenhouse, service employees — which include custodians, facility maintenance, grounds-keeping, gardening and foodservice — are those affected by this recent tentative agreement with the UC and AFSCME; however, the agreement does not include patient care employees who are employed by the university’s medical centers.

Sandra Martinez, an AFSCME 3299 member and a senior custodian on campus since October 2004, said she is pleased with the tentative agreement, which will be ratified by vote between March 5 and 7.

“At the beginning of all this deal, we were asking for a contract and that’s what we are getting,” Martinez said. “We are very close. We are voting today and tomorrow on different places on campus. If we vote and the majority says “yes,” this will be the end [result] for four years.”

According to Stenhouse, the recent negotiation could encourage a similar agreement to occur between the 13,000 UC patient-care employees who have been negotiating “in good faith” with the University for over 20 months.

“We had certainly held out hope that the same spirit of compromise that had guided service negotiations to the finish line would, in fact, hold in the case of patient care workers.”

In an email, UC Office of the President spokeswoman Shelly Meron said negotiations with patient care workers are ongoing and the two groups plan to reach an agreement “very soon.” Meron said the UC is continuing to bargain with them despite the organization’s “unnecessarily destructive and confrontational approach” to negotiations.

“What UC has done is continue to bargain with AFSCME — even as we speak — in good faith, in the hopes of reaching a settlement that is fair to all concerned,” Meron said in an email. “AFSCME leadership has called for this strike authorization vote while negotiations continue.”

According to Meron, the wages and benefits for UC service workers are derived from revenue collected by a variety of university enterprises and services such as parking, student housing, bookstores and food services.

However, Stenhouse said a fair compromise that directly addresses the concerns of AFSCME members is one that can leave a positive impact on both the university and state alike.

“We talk about people getting hurt on the job or that full-time [workers] at the UC that have to sleep in their cars — I’m not making that up,” Stenhouse said. “That’s something that has happened, that does happen, that should not happen. Building a stronger UC and California takes steps to address those issues.”

Martinez said despite being happy with the tentative agreement reached by UCOP and service worker employees, she would be willing to strike in sympathy with patient care employees if their demands are not met.

“I’m supporting them. If they go on strike, then I go,” Martinez said. “This is between sisters and brothers, and we have to stick together.” 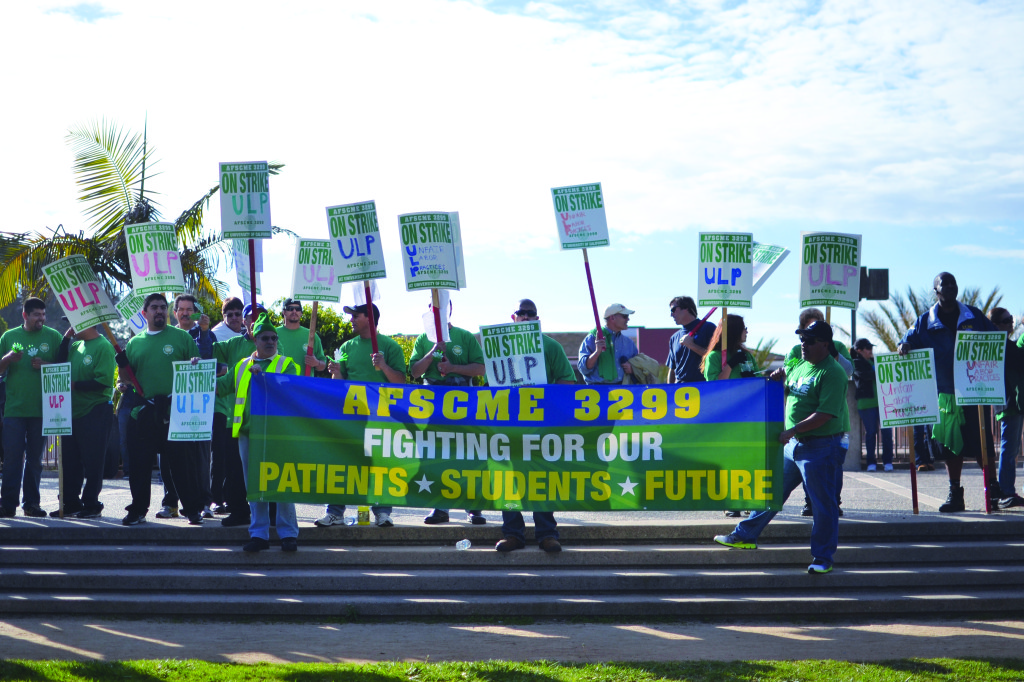 Members and supporters of the UC workers’ union demonstrate in Storke Plaza.

A version of this story appeared on page 5 of Thursday, March 6, 2014’s print edition of the Daily Nexus.