Community organizations and residents of Santa Barbara County came together for a Homelessness Action Summit at Campbell Hall on Monday, with the event focusing on solutions to reduce homelessness in the county.

Social Venture Partners Santa Barbara and the Central Coast Collaborative on Homelessness presented the event, which discussed “housing first” programs that would essentially move homeless individuals from the street directly into their own apartments, bypassing the more common path that includes the use of shelters and rehabilitation. The summit also discussed the idea of creating support systems that would be established using collected data, which would hold transparent results showing which actions work and which do not.

Presenters at the event included Becky Kanis, director of the 100,000 Homes Campaign; Deputy Regional Director of Turning Point of Central California Jody Ketcheside; Anne Lansing, project planner for the Pasadena Housing Department and Philip Mangano, president and CEO of the American Roundtable to Abolish Homelessness. The Master of Ceremonies was Glenn Bacheller, leader of the Homelessness and Low-Income Housing Unit for Social Venture Partners Santa Barbara.

The event opened with Kanis, who spoke on her time as director of the 100,000 Homes Campaign — an organization that holds the support of 235 cities — which is aiming to house 100,000 long-term victims of homelessness by July 2014. The City of Santa Barbara has been a part of this initiative since 2011, and Kanis reported that 85,000 once chronically homeless people are now living in permanent housing.

Next to speak was Ketcheside, who has spent 14 years working to reduce homelessness in Fresno and said the key to making change happen is to persist.

“Don’t embrace any obstacle — there is always a way over it, under it or around it,” Ketcheside said.

Lansing followed Ketcheside and emphasized the success of focusing on a housing first program. According to Lansing, housing first programs save the lives of homeless individuals and are cheaper and more effective at meeting the needs of the chronically homeless than alternative solutions.

Mangano, who was the final speaker, discussed common misconceptions regarding homeless people and said most homeless people are living in the city they are originally from. However, as an issue of human suffering, homelessness is a matter that easily crosses political party lines, according to Mangano.

“There is no D or R next to our names here … just Americans partnered to end a national disgrace,” Mangano said.

Before the end of the summit, organizers held an informal talk between two members of the Central Coast Collaborative on Homelessness, answering questions they had for Ketcheside, Lansing and Kanis.

According to Ketcheside, obstacles regarding homelessness can be systematically assessed and overcome, if given the right approach.

“Identify the barriers and begin removing them one-by-one,” Ketcheside said. “List it and work at eliminating them.” 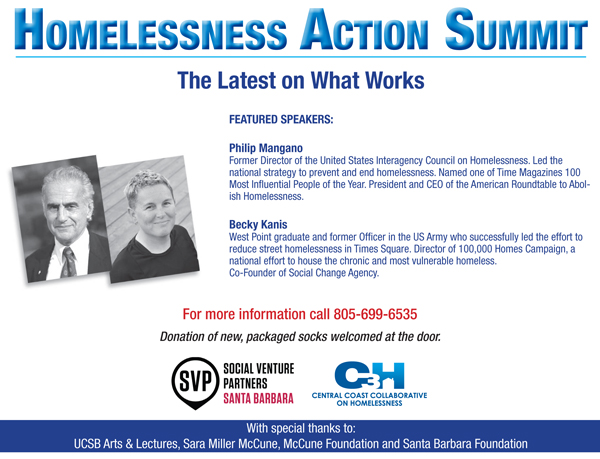 The Homelessness Action Summit emphazises the importance of homeless people getting immediate housing.

A version of this story appeared on page 4 of Wednesday, February 26, 2014’s print edition of the Daily Nexus.