A truly captivating and perfect musical experience is like seeing a shooting star. These moments are always too brief, and perhaps this is what makes them so exquisite. Worries and woes dissipate, mental haze clears and magic is understood.

Experiencing the musical performance of the Bee Eaters with Jesse Harper this weekend was like being hundreds of miles away from civilization during a meteor shower. It had been quite some time since I had witnessed such an honest and engrossing performance.

The group consists of Tashina Clarridge on the fiddle, her brother, Tristan Clarridge on the cello and fiddle and Simon Chrisman on the hammer dulcimer. They are rooted in bluegrass, Celtic and old-time traditions, but are wildly liberal with their influences of pop, jazz and in their own innovative expressions. The trio exhibits musicianship to the core, unapologetically breathing life and music as one and the same.

The Bee Eaters played the first half of the show which took place at the lovely home of Professor Timothy Cooley and Professor Ruth Hellier-Tinoco of the Ethnomusicology department at UCSB. The band was set up outside in the beautiful Sunday sunshine, with about thirty to forty attendees. Surrounded by warmth, with my feet in the grass and sunhat on my head, I felt like I was at a miniature festival. There is nothing quite like sharing music in such an intimate space. There is such communion in a live, acoustic, outdoor setting that can only be understood by experiencing it for oneself. It’s like becoming family with strangers. Perhaps it is an American roots thing, perhaps it is a musician thing, perhaps it is a human thing.

They ended their set just as the sun was setting and the rest of the show took place inside the house. The group was joined with singer/songwriter/guitarist Jesse Harper. Jesse was supposed to play for the entire show but was delayed on his travels from another gig in Washington D.C. and could only make it to the second half. It was remarkable that he could jump right into such a lively and exciting performance after traveling without rest all night and day.

They played some of his original songs, some more Bee Eaters originals, some old-time medleys and some Beatles and 80’s pop covers. Jesse is part of a group that plays bluegrass versions of 80’s songs, and this breadth of repertoire and style was clear in his facility on the instrument. He was a great match for the unique musical characters that are the Bee Eaters. Much of the show was improvised, which required a keen attention to detail and acute listening. The musicians were not only listening aurally, but emotionally and intellectually. Every gesture and reaction was spontaneous and perfect. This was even more impressive given the odd and experimental meters and rhythmic textures that they presented. Their music wove together like an intricate tapestry of sounds and sighs, never ceasing to fulfill.

Given the intimate nature of the event, I had the opportunity to talk with each of the musicians after the show. Tristan, the cellist, revealed that they purposefully try to divorce music from business as much as possible. This sentiment was already clear in the way that they performed, but it was so refreshing to be in the presence of an honest musician who made a point to verbally express this. It is this unyielding faith in music that brings forth the kind of rare excellence that I was able to be a part of last Sunday. 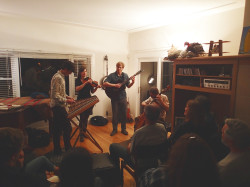 A version of this story appeared on page 11 of Thursday, February 20, 2014’s print edition of the Daily Nexus.