The Daily Nexus
News
Gloria Steinem To Give Talk on Career and Status of Feminism
February 12, 2014 at 5:00 am by Connor London

Gloria Steinem, a leading figure of the women’s liberation movement of the 1960s and 70s, will give a talk at the Arlington Theater tomorrow at 8 p.m.

Hosted by UCSB Arts & Lectures and sponsored by the local Orfalea Foundation, the event — titled “The Longest Revolution: An Evening with Gloria Steinem” — was moved from its original location in Campbell Hall to Arlington due to high demand and will be free for UCSB students. According to Associate Director of Arts & Lectures Roman Baratiak, Steinem’s talk will focus on her influential career, the status of feminism today and where feminism is moving in the future.

Steinem, who recently received the Presidential Medal of Freedom for her activism, gained prominence within the feminist community after writing a groundbreaking undercover story on the working conditions of women in New York clubs. She later co-founded a number of feminist organizations, including the women’s magazine Ms. and lobbying group National Women’s Political Caucus.

Eileen Boris, chair of the Department Feminist Studies, said Steinem represents a role model for modern feminists, as well as for those fighting for the rights of underrepresented groups.

“Gloria Steinem is an icon on the bible of feminism of the late 1960s and 70s,” Boris said. “She is an unapologetic leader that spoke her mind [and] whose life story represents a possibility that is today closing because of the growing gap between rich and poor as well as citizenship status and race. Her struggles are a reminder of the power of coalition politics.”

According to Catherine Brozowski, vice president of the Orfalea Foundation, her organization gathered statistics on the status of women’s quality in Santa Barbara in preparation for Steinem’s talk. Among the findings, 17.4 percent of women are in poverty in the county compared to 15.3 percent of men, even though “more women have Bachelor’s Degrees than men,” Brozowski said. Additionally, women make up 39 percent of the county workforce but earn 81 cents for every dollar earned by men.

However, the statistics also revealed women do earn more money than men in three out of 13 sectors: professional, scientific and management; construction; and whole sale trade.

Steinem, who is still active in the feminist movement, recently returned from India, where she was supporting gender equality and is currently working on her seventh book, Road to the Heart: America As If Everyone Mattered.

Second-year feminist studies and English major Kelty Kauffam, also the co-chair of UCSB’s Take Back the Night, said she has been inspired by Steinem’s work to “think critically about everything.”

“Steinem is an influential leader of Second Wave Feminism, promoting ideas many people are interested in today, like reproductive freedom and equality in the work place,” Kauffman said.

Tickets for Steinem’s talk cost $33 to $43 for the general public. For more information visit www.artsandlectures.sa.ucsb.edu. 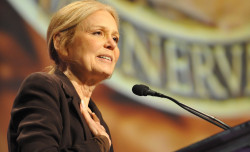 A version of this story appeared on page 3 of Wednesday, February 12, 2014’s print edition of the Daily Nexus.

[Correction: In the print edition of this article Eileen Boris was incorrectly identified as Ellen Boris. The Hull Professor and chair of the Department of Feminist Studies is in fact, Eileen Boris.]

The grand wizard for the world’s most officially coddled hate movement is given the Presidential Medal of Freedom by the nation’s top gender bigot/traitor…and is predictably feted by UCSB’s leading lights. Is this same UCSB which is rated one of the top schools in the nation?