The Daily Nexus
Regents
Veteran Affairs To Be Addressed by UC System
February 5, 2014 at 5:00 am by Loren Forrester

Talks commenced Friday as Napolitano invited one veteran representative from each UC campus to discuss how best the system can accommodate the needs of the 1,400 veterans and active duty military personnel currently enrolled in the UC system. The agenda for the meeting came largely from the veteran representatives, whose intent is now to convey to Napolitano — through a series of subsequent meetings — what the specific needs of each campus are and where systemwide reform would be useful.

According to the UC Office of the President Spokesperson Dianne Klein, among some of the issues discussed at the conference were improved lines of communication between the UC administration and veterans in regards to financial aid packages, as well as increased training for UC employees responsible for veterans’ affairs.

Student Veterans Organization President and fourth-year biology major Paul Malone said he was concerned with a number of other areas more specific to UCSB’s veterans’ affairs. Furthermore, he said the biggest need of UC student vets is a space they can call their own and find all the resources they need.

“The most important thing to me, hands down, was finding centralized space on every campus for a Veterans Resource Center and offices for a Veteran Resources Coordinator and a VA Certifying Official — all in one place,” Malone said.

“That’s the exact type of thing that should be raised by this group,” Klein said. “These are the types of issues that the group will be discussing among themselves and coming up with recommendations.”

One current problem, according to Malone, is that veterans consistently come onto campus not knowing what resources are available to them.

“We have federally mandated employees on campus that are here to support veterans like the Certifying Official,” Malone said. “So they go there, and that’s the last stop they really make, [even] when there’s all these other support systems that can be consolidated into one place.”

“Right now, I have priority registration,” Buckles said. “And if I wanted, I could live in priority housing.”

Malone said that along with these resources, student veterans also have opportunities for scholarships and mental health services. Another priority Malone said he wishes to focus on is a system to track where veterans are at UCSB.

“Right now, we have no system in place to accurately track the veterans who are on the campuses now,” Malone said. “What we have right now is a sort of weak system, as far as tracking who is using their GI bill. If they’re not using it, we’re not really sure what our numbers are here.”

Despite these issues, Napolitano’s office was pleased with the meeting overall, Klein said.

“This was the first meeting, and from all reports, it was off to a good start and there was a lot of frank discussion,” Klein said. “But the good news is everybody wants to do what’s best for veterans.”

As for those veterans here in Santa Barbara, Buckles said he would like to see the SVO maintain a larger standing on campus.

“We could use more of a presence,” Buckles said. “Not a lot of people honestly know about the SVO, so we could work on that.”

A larger presence could be on the horizon, however, as Malone indicated that members of the SVO would be meeting with Chancellor Henry T. Yang this Friday to further discuss the possibility of a centralized Veterans Affairs Center on campus. 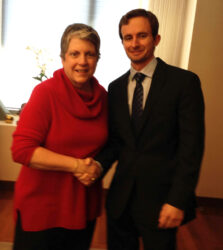 A version of this story appeared on page 1 of Wednesday, February 5, 2014’s print edition of the Daily Nexus.