We were honored by the presence of Kip Fulbeck, a renowned artist, filmmaker, author, spoken word performer and emcee for the show, which featured students from the highly regarded spoken word class he teaches at UCSB. With the help of Demi “the Demoness of Didactic Discourse” Anter and the other Right Side Up Poets (a group of veteran performers who have emerged out of the class), those familiar and unfamiliar with the art form were able to fully immerse themselves in what spoken word is really about.

The show kicked off with the dark horse of the evening, Chanel Miller. A natural at spoken word and a gem of a performer, she told a story about always being considered “nice.” The seemingly innocent piece escalated quickly into one of the most epic, entrancing series of run-on sentences, chock-filled with swear words. Even the bartender’s jaw dropped as she delivered the honest truth.

Fulbeck introduced Katie Edwards as a first-time performer — and she should definitely not make this her last performance. Her piece hilariously portrayed her relationship with her not-so-average mother and was backed up with visual aids, causing the audience to roar with laughter at each photograph and screenshot.

Despite her mother’s crazy stories, unusual relationships and surprising tattoos, Edwards referred to her mom as her “Wonder Woman” and concluded that no matter how out-there she is, family is family. Plus, how can you not love a woman so interesting?

Next up was Kelly Hendrickson from Los Angeles. Now, this was a truly theatrical performance. Think “Maureen mooing at the audience in RENT” theatrical. She humorously touched on different topics of life starting with “honestly” and then hitting us with “seriously” surprising responses. I can say that honestly, Hendrickson is seriously talented. Her final line wrapped up her piece nicely and on a touching note: “Seriously, it’s okay to be honest and honestly, it’s okay to be serious.”

Next, Sasza “Fierce” Lohrey went off on a stream of consciousness piece that floated between the varied topics that take up space in her head like “How do fat people have sex?” “What does a boner feel like?” and “What is sexy?” The piece hit its peak in a hilariously awkward display of chair dancing and culminated in an answer that “Sexiness is confidence.”

A veteran to “Talking to Strangers,” Mel Rosenberg entered the stage and exclaimed, “I want you to fuck me!” As she explained the many ways in which she would like this to happen to her, the methods became less lewd and more romantic, and eventually led to a confession that she has never actually experienced anything like what she had described. As vulgarity turned to sensitivity, she admitted that she’s scared. The sweet ending left the inexperienced in sex feeling that it’s okay to be unsure and that a great deal of inspiration can come from such uncertainty.

It was a treat to see Jinling Huo (another RSUP veteran) transform from my old roommate’s older sister into the personification of a raging period. We’re talking menstruation, people.

Huo’s performance was as intense as the period cramps she despises. I began to think it was all an over-exaggeration but wait — the munchies, the depressed hormones, the utter horror of it all? Nope, she was right on point. My favorite part was when Huo surprised us with a rap that even Jay-Z would be proud of.

Next up, Ferguson and Lohrey returned to the stage to perform a duet piece written by Lohrey. A hilarious take on dating from first meeting to first sexual encounter, the two expressed the typical views of a girl in I.V. vs. a bro in I.V. while overlapping and riffing off of each other. Lohrey mentioned how girls need to be “classy before they get nasty” while Ferguson considered a rendezvous at Freebirds at 2 a.m. a solid date.

Edwards also returned for a second performance which she dedicated to light-brown boys. In this piece she expressed her love for foreign boys and her disdain for the average white guy. At first, I found the Middle Eastern, Asian and European stereotypes slightly offensive and felt that her piece may have been exoticizing men of color.

I spoke to a friend who also attended the show, first-year CCS art student Vj Masharani, and found he had a different view on the topic. He said that he was flattered by the piece.

“It’s not abnormal for people to be sexually attracted to some races over others and it shouldn’t be faulted since there’s no malicious or harmful intent in that attraction,” he said.

Although our views differ, the piece was successful in creating discussion about an important and complex issue.

Taking a lighthearted turn, Natalie Earhart reminded us about the importance of texting and the many methods of doing so, for example THAT WRITING IN ALL CAPS MAKES YOU SOUND AGGRESSIVE EVEN IF YOU’RE NOT TRYING TO BE, DAD. She listed texting Do’s & Don’ts as well as quality “abbrevs” (cb = caj barf, caj barf = casual barf) in what was a funny and relatable piece about the good and bad aspects of how we “commune” in this day and age.

Ryan Yamamoto, another RSU powerhouse, took the stage next. His piece was more of the story-telling type as he dwelled on different types of fear, how ideas turn into fears and expand into political and global terror. Yamamoto really left us thinking with his conclusion, “The real war on terror needs to begin first in our minds.” If only people like Yamamoto ran the world.

Then came a familiar scenario all of us Isla Vista dwellers have experienced many times before: The awkward dance party. Megan Ogle began her piece by raising her nose at all of the thirsty freshmen grinding and thrusting on each other, and somehow ended up doing the same. Her awkward moves charmed the audience and expressed the intimacy she feels when dancing with friends, an intimacy that trumps the usual, sexy bump and grind.

Fulbeck’s introductions for each person so far had been about their backgrounds, hobbies and achievements but for Elizabeth Folk, all he had to say was “odd.” We soon learned that it was the good kind of odd. Folk walked on stage with a chair, sat down and stared us in the eye. She had a jar of pennies on her lap and nonchalantly began telling a story about her childhood. The piece delved into the fascination we sometimes feel over things that are really repulsive, and it ended with pennies all over the stage. It was one of the odder pieces of the evening but surprising and hilarious nonetheless.

Miller returned to stage with a second piece called “Bubble Trouble.” This was possibly even more entertaining than the first piece as she began with a glimpse of her mind urging her to the elliptical machine at the YMCA. She showed off her skills, creating characters through voices, volume oscillation and great acting. We entered Miller’s mind as she lashed out at a creeper in the YMCA hot tub and felt vindicated by her lively display.

Things started to calm down as Demi Anter walked onto the penny-scattered stage. Hers was a cute and relatable story about liking boys, but not just any type of boys: Hipster boys. I found myself and a few others laughing and nodding along to the guilty confession of pretending to also like or do weird things just because someone cute says they are cool. The hilarity of it all boiled down to Anter seeing her ideal hipster boy again and realizing she may have slept with his “American Apparel-wearing, Game Boy-sharing” double.

A magical night of talent came to an end with Miranda Morgan, who closed with a piece about physical impairments in childhood. A more solemn and heartfelt story, we grew with Morgan as she tried to dance but was too weak, as she tried to find spiritual salvation and was thwarted.

There couldn’t have been a better ending to the night: Morgan showed us her “warrior pose” and her inner strength while saying in the voice of her yogi, “You are perfect, you breathe.” Morgan did what much art strives to do: She made us feel great to be alive.

After talking to a few of the performers, I learned that many of them were inspired to tackle the art of spoken word after watching last year’s “Talking to Strangers” event. Each one of them emphasized the importance of Fulbeck’s teaching in their progress as performers.

Never having taken a class with Fulbeck, I asked a few of his former students what the experience is like. The unanimous opinion was that Fulbeck is an intense, inspiring, terrifying and an unforgettable person.

For each of the performers I spoke to, taking his class and taking up spoken word has changed their lives entirely for the better. Some said they had never before felt their experiences were significant to others, that the thrill of performing is like nothing else, that it is a good outlet to express true feelings and, in the words of Demi Anter, when you’re performing spoken word, “You don’t feel so alone in the world.” 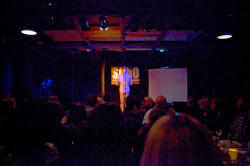 Kevin Ferguson performs a poem for a packed house at SOhO. Ferguson took Prof. Kip Fulbeck’s spoken word class as a senior in 2012 and performed at the first “Talking to Strangers” event later that year.

Relished your piece word to word. It transported us (read aloud for the benefit of my sight impaired father) to Santa Barbara and made the poetry-laden-air of the bar so palpable. Keep them coming.