The electro-wunderkind has made waves in the last year, and so have Speak Volumes and We The Beat, the impressive local music lovers, bloggers and organizers who hope to make Giraffage part of your Thursday night.

Tonight, local music blog Speak Volumes teams up with We The Beat to present Bay Area beat-maker and multifaceted artist Giraffage in a downtown Santa Barbara show at SOhO.

At only 22, Giraffage has made some serious moves. He was recently picked up by Alpha Pup Records, his 2013 release Needs got attention on several taste-making music blogs including Pitchfork and he has been touring non-stop, including a stunning live set at Treasure Island Music Festival last fall. Fans of J.Dilla and James Blake will surely find a haven in Giraffage’s music, which also dips into some unusual territory for an electronic act.

Speak Volumes’ Event Coordinator and co-founder Jonny Lipshin sees this as an important step towards becoming what he refers to as “a more legitimate media/music entity.” He also commented on the two-folded nature of booking Giraffage.

“It is ironically both logical and risky,” Lipshin said in an interview via email. “Considering the burgeoning interest in beat-making music today … it made logistical sense. However, it is always a leap of faith to book an artist who’s on the come-up.”

Still, Lipshin has high hopes for the event overall, which, at the time of the interview, already seemed likely to sell out.

“We put our faith in the SB community to be into someone who challenged the traditional landscape of the SB music scene (i.e. guitar music, electro, hip-hop, reggae), and they have responded really well,” Lipshin said. “Plus, on a more content-based level, [Giraffage] aligns pretty well with Speak Volumes’ focuses. I’ve seen him a couple of times and he puts on a killer, killer show.”

This is the first of Speak Volumes’ ticketed events. The UCSB-centric group started as a blog last April (www.speakvolumesmedia.com) but they have quickly broadened their scope to include a (beautiful) quarterly zine and free concerts in Isla Vista.

We The Beat is another local group of twenty-something music bloggers and promoters who have already presented successful events at SOhO with bands Carousel and Goldroom.

Their pairing with Speak Volumes seems like a natural fit: Attendees of tonight’s event can expect an eclectic evening that showcases talented up-and-comers.

The acts completely fit in with the spirit of the organizations behind them. In fact, the openers are UCSB students. Cub’b (fourth-year student Chris Cubbison) and Underbelly (first-year Timmy Linetsky) — whose recent remix of Lily Allen’s “Smile” has had over 64,000 plays on YouTube to date – promise to turn up SOhO with their electronically influenced sets.

Lipshin shared his excitement for this upcoming convergence of cutting-edge, wunderkind music-makers.

“Guests at the show tomorrow night can expect the best January show SB has to offer,” Lipshin said. “Giraffage and the two openers are all incredibly talented artists, and should help broaden the tastes of anyone attending whose musical palette may be less diverse.”

While Speak Volumes’ focus is certainly on the local and what Lipshin calls “left-of-center dance music,” We The Beat emphasizes the “live” in “live show,” booking artists who can deliver to a crowd and avoiding the stagnant energy that sometimes hovers around DJs who get on stage and just press a button.

In a recent press release, Kirk Reed spoke on behalf of the organization, saying that “In Giraffage, Santa Barbara will see a performer who really interacts with the crowd and keeps things interesting by triggering samples, twisting effects and basically creating the whole song from scratch. His music is incredibly fun, so it will definitely be a party, but the performance aspect is key, too.”

You heard it here. SOhO is the place to be tonight for a fun, eclectic evening of music.

Plus, every ticket helps show support for two groups that are doing great things for the Santa Barbara scene by taking the reins into their own creative, capable hands. SV and We The Beat: Keep doing what you’re doing.

Tickets can be found online through www.sohosb.com. 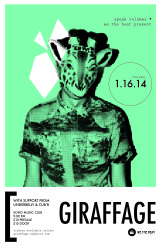 A version of this story appeared on page 8 of Thursday, January 16, 2014’s print edition of the Daily Nexus.