Having the responsibility to lead sections as a graduate student at UCSB may be a hard task for anyone without much experience in teaching or grading, but Ph.D. candidate and political science teaching assistant Skylar Covich manages to do so while visually impaired.

Born in Westwood, New Jersey, 26-year-old Covich is a blind T.A in the political science department. In 2005 Covich enrolled in Saint Mary’s College in Northern California, where he studied Politics with a minor in Religious Studies. Currently Covich has his masters in American Politics and is expecting to receive his Ph.D. in the next few years.

Covich, who has been blind since birth, said leading a normal life has never been an issue. According to him, he went “mainstream” — a term used to describe taking regular classes with other students without disabilities — in the first grade.

As Covich grew up, he had to read Braille and learn how to use a talking computer, which he now uses to grade papers. Throughout high school, Covich was actively involved in many extracurricular activities such as band, a blind skiing program and a trivia team featured on the TV show Academic Challenge. Since his time at UCSB, Covich has served as president of the Political Science Graduate Student Association and is currently the Political Science program’s chosen representative to the Graduate Student Association.

Covich said he maintains a mostly auditory teaching style, making it his goal to prioritize and accommodate students. His method of instruction has received praise from students and faculty members alike. Third-year political science and economics double major and Covich’s former student Allan Krinsky, for example, said his teaching methods were very effective because they kept the entire class interested and active throughout section.

“Being in his section was such a phenomenal experience,” Krinsky said. “He knew the material front to back and, more importantly, knew how to make us understand it. He is definitely one of the best T.A.s I’ve had at UCSB.” Krinsky also said Covich’s aural style offered a unique learning experience different from typically visual teaching styles. First-year political science major Jordyn Schiff, also a former student of Covich’s agreed and said Covich is an outstanding educator who strives to really help students.

“He is very intelligent and driven to help every student understand the material to the best of their ability,” Schiff said.

According to political science undergraduate adviser Stephen Weiner, Covich has a motivational effect on his students and has always been very interested in student feedback.

“His students are always commenting positively about how available he is, how quick he is about responding to his inquiries … he creates a positive learning environment,” Weiner said.

Covich said in class, his main goal as a T.A. is to find out what his students do not understand so he always begins lessons with a question. In addition, Covich said he seeks to give his students a different perspective on the material taught by the professor.

As for his own political viewpoints, Covich said he has always had an interest in the struggle for power between the two primary American political parties, which became one of the many reasons he chose to pursue a Ph.D. in American Politics. Covich said he tries to both study and teach with a politically nonpartisan point of view and will always have an opposite argument at hand, regardless of his own opinions.

“For every political system and for every ideology, there is always a major flaw that prevents it from reaching its full potential,” Covich said.

While living in the graduate student housing complex San Clemente Villages, Covich frequents Carillo Dining Commons and spends much of his days on campus. Navigating his way around bicycles and skateboards, Covich said he gets through campus pretty easily, especially with the support of other students and faculty. Additionally, Covich said the Disabled Students Program helps him out by translating books into either Braille or into a Microsoft Word document.

Being a blind teacher or professor is not uncommon, Covich said, as he has had a blind professor before, who currently serves as one of his many role models. According to Weiner, Covich is not the only blind teacher at UCSB, nor in the Political Science program. Visiting professor Amit Ahuja is also blind and teaches Comparative Politics.

Beyond receiving his Ph.D. and becoming a professor, Covich said he has also contemplated a career path “in college administration.” 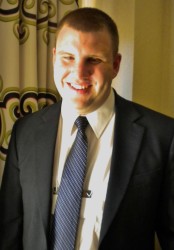 A version of this story appeared on page 3 of Thursday, January 16, 2014’s print edition of the Daily Nexus.

Thank you for the wonderful article you wrote about my son Skylar Covich UCSB. It captures his dedication and the story of Skylar’s lifetime effort to excel and help others. You are an amazing writer with great insight. Very well done.

Skylar Covich was a piano student of mine for several years when he was a teen. I found him inspirational, humorous, and a superb person. From him I learned a lot about what it means to be human and giving. His success in his field is not surprising, and I only hope that he will become a public leader in addition to a professor. What potential for insight !