From noon to 8 p.m., the event provided attendees with ice skates and featured hourly raffle contests, a free photo booth, a food stall and special lunch item sales that included pork sandwiches and chip bags. An area was also available for participants to donate money to the A.S. Food Bank and decorate cards for military veterans.

“We tried out this event last year, and because it was a really big hit, we wanted to bring it back again this year,” Gudino said. “I’m not sure if this will end up becoming an annual event because it’s really up to the future program boards, but so far, the past two years it’s worked out great.”

The event saw attendance from a wide range of figures on campus, such as Associate Dean of the College of Engineering Glenn Beltz, who said he learned about the event through a colleague.

“It’s really cool they were able to put this event on. It’s sunny and 75 degrees outside, but here inside the Corwin Pavilion, it’s quite cool,” Beltz said. “I think it’s a great event and a nice way to cool off.”

While the ice rink was temporary, there are ongoing efforts to build a permanent rink in the nearby suburbs of Goleta. The Greater Santa Barbara Ice Skating Association (GSBISA), a nonprofit organization looking to bring ice-skating to the local community, is currently trying to fundraise $8 million to build an ice arena on Storke Road.

According to the organization’s website, construction plans for a new Goleta rink — which would be the only one between Oxnard and San Jose — were initially proposed in 2012. However, the plans were brought to a halt when there was a $1 million shortage in funds, so future construction is unlikely to begin before next year.

Additionally, the need for a local rink has affected some UCSB students, such as first-year biology major Victor Quach, who have had to leave their ice-related hobbies behind. Quach said having an ice rink nearby would encourage him to get involved in some of the ice sports he used to regularly play.

“I didn’t want to join the UCSB hockey team because I didn’t want to drive all the way to Oxnard just for practice and games,” Quach said. “I miss playing ice hockey. It’s the biggest downside to UCSB.” 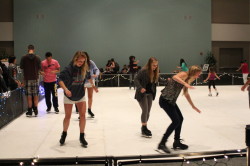 Students were able to enjoy a free ice-skating event for the second year in a row thanks to Associated Students Program Board and the University Center. They brought the ice rink event back to Corwin Pavilion after the large turn-out at last year’s event.

A version of this article appeared on page 4 of the Thursday, November 14, 2013 print edition of the Daily Nexus.