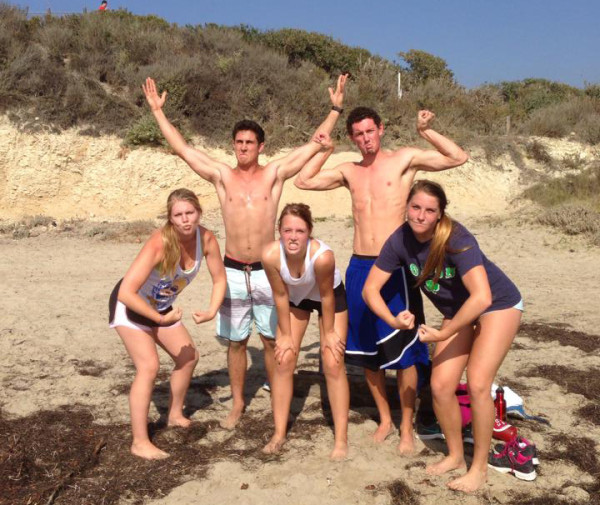 It had been overcast all morning, but within mere minutes, the marine layer parted, the ocean — that brilliant blue mirror — reflected the sun’s rays, and suddenly, there wasn’t much else that could have made our beach workout any better.

Six weeks ago, Daily Nexus Opinion Editor Emile Nelson and I were just talking when I mentioned I had gotten a gym membership over the summer, and he told me I should check out this group he was starting up that Saturday called SB Fitness. I went, and it was ridiculously fun.

The idea for SB Fitness was the product of Nelson’s experience at a boot camp in Thousand Oaks called 24Fit, run by his friend Trevor Van Uden. Nelson said, “That was the first thing that got me thinking about it, and then I collaborated with him on it.”

According to Nelson, college students forget they need to stay active once they go to college. For this reason, he decided to bring a program like the boot camp to UCSB.

“It’s a good opportunity to help a lot of people and have a lot of fun doing something I really enjoy,” Nelson said. “It’s a good way to spread a lot of confidence and a lot of happiness through something as simple as an hour a week.”

SB Fitness engages in a lot of cardio and plyometrics and is great for the simple reason that it is different every week. It is definitely not your stale dumbbells, crunches and elliptical-or-StairMaster workout, to say the least.

“I like how it’s so simple and free, and it’s on the beach, and you go out there with friends and just have a good time working out,” Venegas said. “Emile’s a great guy for leading it.”

We always start by running to Manzanita Beach. We stretch in many different ways, such as by hugging our ankles and doing these weird caterpillar movements that really target our hamstrings. We always finish with abs, mainly a mix of crunches, penguins, toe-touches and two inches, which are murder — you hold your knees together in the air and lower your torso 45 degrees, then sit up a little bit, then lower yourself a little bit… it’s hard. Of course, we never forget to take a group picture at the end so we can gauge our progress from week to week. No one cares about the sand clinging to their shirts, their arms, their legs — everything.

We also just like to show off our six-packs, and believe me, there are six-packs. We’ve done cardio circles, in which we count off in pairs and one group jogs, sprints, or lunges around four cones while the other does push-ups and squats in the middle before we switch. We’ve done Indian runs, in which one person runs and does bear crawls, crab walks and frog jumps around everyone else while they plank. We’ve done push-ups, sit-ups and burpees with partners, so we’re forced to keep up with each other.

Last week, we even started doing personal bests. We do as many push-ups and crunches as we can in a minute, hold planks and air-sits for as long as we can and sprint from one piece of seaweed to another piece of seaweed as quickly as we can. Each week, we’re going to try to top ourselves and see how much stronger and faster we’ve gotten.

While most people who come out are already relatively in shape, SB Fitness welcomes people of all levels of fitness. If you feel you can keep up, kudos to you, but if not, it is perfectly okay to do fewer reps or make something a little easier.

“I like how personal the workouts are,” Nieman said. “We really personalize the workouts based on what we want to get better at. It’s like a little family.”

On the other hand, if you’re Superman and aren’t feeling anything, you can make your workout a little harder.

“I make it challenging for myself. It’s perfect because if you want to make it harder you can,” Venegas said.

Out of everything though, most SB Fitness people seem to agree that the highlight has been the relays we did the first Saturday that the workouts began. There were eight of us, so we organized ourselves into four teams of two and one person sprinted while the other did burpees and sit-ups.

I think everyone woke up sore that Sunday. Then again, I wake up sore every Sunday. Thankfully, I’m not the only one. “Most of the time I think it’s just fun as I’m doing it, but the next morning I can never walk,” Nieman said.

Despite my soreness, I was so pumped after that first Saturday that when I came into the Nexus office on Monday, I would not shut up about how fun it was.

That’s the best thing about SB Fitness — we have fun and simultaneously push each other to do a few more push-ups, to hold that plank a little longer and to run a little more quickly.

“There’s a lot of competition, but it’s really healthy and everyone seems to appreciate the competition we have. There are no hard feelings, and you’re not going to be attacked for your level of fitness or your lifestyle,” Nelson said. “We’re all friends, and we’re all there to get better.”

Nelson hopes to see SB Fitness grow yet remain closely-knit. His biggest goal is to encourage people to want to be active.

“More than anything, I want it to be a reminder that it’s never too late to get fit,” Nelson said.

SB Fitness meets every Saturday at 11 a.m. on the University Center lawn. If you’re interested, come out and show us what you got.

As a Newbie, I am permanently exploring online for articles that can help me.
Thank you

Here is my page: Daniel Aronson