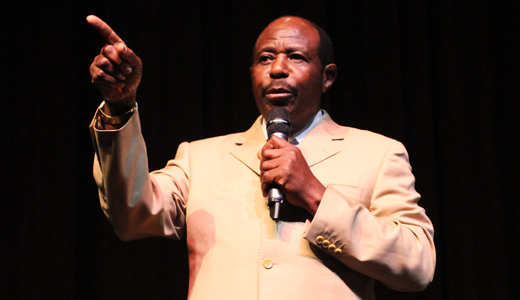 Humanitarian and Rwandan hotel manager Paul Rusesabagina, whose efforts in hiding and protecting 1,268 Hutu and Tutsi refugees during the Rwandan Genocide provided the basis for the film “Hotel Rwanda,” spoke publicly to a packed Garvin and Jurkowitz Theatre at Santa Barbara City College on Friday.

In discussing the genocide that began April 7, 1994 and resulted in the deaths of anywhere from 500,000 to 1 million people, Rusesabagina also talked about his experience in saving the refugees who hid in the hotel he managed, Hôtel des Mille Collines. Additionally, he told the story of how he survived from being slaughtered by the extremist Interahamwe militia, and he discussed the power of peaceful dialogue, rather than violence, in fighting evil.

According to Rusesabagina, all people have a duty to teach youth the best way to address evil so that they may apply this learning to future events.

“Every hard heart will always have a soft spot,” Rusesabagina said. “Look for that soft spot. It is your duty. Apply maximum energy on that spot, until you come up with a result.”

During his talk, Rusesabagina described many of his role models and figures of inspiration. One of these individuals, Rusesabagina said, was his father, whom he respected for instilling honest values in him at an early age. In his discussion, Rusesabagina recalled a story his father told his family during a New Year’s dinner.

“If you see two brothers fighting, your mission is to separate them. Stand in the middle. Never look to the left side or right side. By doing so, you might be influenced by either one,” Rusesabagina said. “Instead, look upwards, and only speak the truth.”

“It’s amazing that Paul read about Dr. King, who was really into passive resistance. It was coincidental that he was reading and studying that because Paul actually applied it to his own life in a really influential way,” she said.

Professor Joseph White, UCSB alum and chair of the philosophy department at SBCC, is the executive director of “A Year Without War,” a nonprofit organization working toward creating a year of global ceasefire beginning Jan. 1, 2020. White said he invited Rusesabagina to SBCC in hopes of educating today’s youth about the Rwandan genocide.

“When Paul was in Southern California last, one of his contacts contacted me because they knew we do these programs,” White said.

Chase Paisley, economics major at SBCC, said he felt extremely privileged to be a part of the audience and listen to Rusesabagina speak.

“It’s rare throughout history to see people who make such a big impact. He’s one of those figureheads that will be written about across history as time goes on.” Paisley said. “He stood up against an extreme opposing force, and he made a difference. One day my kids will learn about him in history class, and I can tell them that I saw him speak at my school.”

Since the genocide, Rusesabagina has been living in Belgium and the United States, and now he works on the Hotel Rwanda Rusesabagina Foundation, a non-profit company he founded to prevent future genocides.

A version of this article appeared on page 1 of November 12th’s print edition of the Daily Nexus.