Serving as the proclaimed influence to the likes of renowned musicians Eric Clapton, Jimmy Page and Jimi Hendrix, Guy is seen as a pioneer of the Chicago blues sound and has been ranked number 30 in Rolling Stone magazine’s “100 Greatest Guitarists of All Time.”

According to Annie Lawlor, Guy’s assistant and Legends/GBG Artist manager, the renowned blues guitarist has a unique stage presence that captivates his audience during every performance.

“He has been known to play behind his back, with his teeth or with a drumstick,” Lawlor said. “He makes sure people are entertained. He really grabs their attention and holds it.”

Born and raised in Louisiana, Guy began performing with bands in Baton Rouge during the early 1950s. Before leaving Baton Rouge, Guy was heavily influenced by Eddie Jones, a New Orleans blues guitarists of the 1940s and 1950s under the name Guitar Slim, whose shows were unique and energetic, inspiring a blueprint that helped define Buddy Guy’s style, according to Lawlor.

“At the start of the show, Buddy could hear a guitar, but Guitar Slim was nowhere to be seen. He turned around, and saw Guitar Slim on a giant security guard’s shoulders at the back of the theatre,” Lawlor said. “From that moment, he wanted to act like Guitar Slim and play like B.B. King.”

Inducted into the Rock and Roll Hall of Fame in 2005 by Eric Clapton and B.B. King, Lawlor said Guy is one of few blues legends that have come to create the foundation for contemporary genres like rock ’n’ roll and hip hop.

“There is a story about Jimi Hendrix canceling his own gig in New York because Buddy was playing the same night and Jimi wanted to attend,” Lawlor said. “There is a video on YouTube of Jimi in the front row of that show; he was a big fan as well.”

Fourth-year computer science major Tom Carli said he was amazed when Guy came off the stage and played amongst the audience, saying he was blown away by Guy’s funky sound.

“No other performer could go on stage, rub his guitar on different parts of his body and make soul music out of it,” Carli said. “As soon as he stepped on stage, every single pair of eyes was focused on him. When he got off stage and walked around, everyone was fixated on him.”

Local Santa Barbara blues and jazz musician Chelsea Gutierrez, who grew up listening to Guy’s music, said she was proud to see him mentoring young opening act Sullivan, in hopes of encouraging his natural talent.

“As a music enthusiast, it was an honor to be able to see Buddy Guy perform live, after all that he has done for Quinn and music as a whole,” Gutierrez said.

Local Santa Barbara optometrist Neil Mietus — a Guy fan since the first time he saw him perform with Junior Wells at The Astro in Los Angeles — said he was blessed to be able to see Guy perform again. He said the last of Guy’s performances that he saw featured the blues guitarist breaking a string in the middle of the song and restringing it “while he was still playing.”

“He signed my guitar when I told him that story 10 years ago backstage at the Canyon Club,” Mietus said. “Having Buddy as a mentor doesn’t get much better than that.” 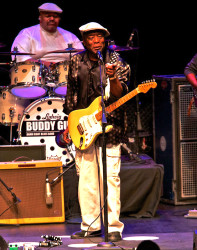 Blues icon Buddy Guy rocks out on stage. Inducted into
the Rock and Roll Hall of Fame in 2005, Guy is ranked by
Rolling Stone as one of the best guitarists of all time.

A version of this article appeared on page 1 of the Wednesday, November 6, 2013 print edition of the Daily Nexus.