The Daily Nexus
News
‘The Wilde Circus: Vitriol’ Opens at Santa Barbara Art Foundry
October 31, 2013 at 5:00 am by Elliott Wright

The show opens Halloween evening at 7:30 p.m., with additional performances on Nov. 1 and 2 as well. The show will feature a multimedia stage including human actors, projection art, fire dancing and human puppetry.

Violet Bast — author, co-producer, co-director and actor — helped found Sexy Sandwich Productions three years ago. The company is a part of the Fishbone Art Collaborative, a local nonprofit that assists local artists, and the cast is entirely volunteer-based. Bast explained the six-month process of writing the script as well as her role in the production.

“There’s a lot of reading and writing involved. The stories I like to tell are very character-driven. I wrote lots of backstory for each character, oftentimes before I included them in the script,” Bast said.

Among other influences, this production provides a contemporary extension to mythology, according to Bast.

“I have been influenced by Anne Sexton, Angela Carter and I read a lot of the classics. Our gods and heroes aren’t dead, they’re just wearing spandex,” Bast said.

Andres ‘Bo’ Filomia, who received his B.S. in Philosophy from UCSB in 2003, said he was eager to become part of Sexy Sandwich’s first production as soon as he learned of it. Filomia said he hopes UCSB students will venture out of the confines of Isla Vista this Halloween and check out something “unique” and “creative.”

Filomia said his character, Jim-Dear, also known as “The Grey Man”, is portrayed as a selfish underworld character with an interesting back story.

“My character is the product of a gambler who was hanged to death,” Filomia said. “After getting an erection, which sometimes occurs to the deceased, he ejaculated. When his semen hit the dust of the gallows, a demon was formed. I have been in the underworld of magic trying to get more power for myself.”

Cast members will partake in fire dancing during the performance, after having undergone extensive training in preparation, so the performance will be performed entirely outdoors. Co-producer and actor Krystal Freedom, who founded a group dedicated to fire dancing called Pyrophoria, said the process of incorporating fire dancing into theatre was costly but worth it.

“It is a great aspect, even though it is very expensive because we have to rent everything,” Freedom said. “It’s more expensive to perform outdoors, and less people want to come because it can get cold. If you are planning on attending, definitely have a blanket.”

Martial artist Michael Whitney fight-choreographed the entire play. After studying martial arts for 30 years and teaching them for 17, Whitney is able to create realistic fight scenes and said he looks forward to creating new fight scenes for Part Two of The Wilde Circus.

Whitney said he greatly enjoyed working on the production and thought audiences would enjoy watching it.

“Excitement would be the best way to describe the production in one word,” Whitney said. “You got action and beautiful girls kicking the shit out of people. It doesn’t get better than that.” 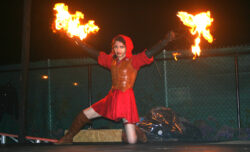 A version of this article appeared on page 6 of the Thursday, October 31, 2013 print edition of the Daily Nexus.