Despite the museum’s serene feel, the artworks exhibited were touched by undercurrents of unrest and protest. Held from 5:30 to 7:30 p.m., the reception made way for an eclectic group of observers, from curious students wandering through the miniature maze of art pieces to couples holding hands and gazing at the displayed pieces. The event featured a live DJ, while each exhibit featured a unique layout and all the displayed works came from a wide range of media, from drawings to sculpture.

One exhibit, “Artist-in-Residence: Fran Siegel, Translocation and Overlay,” is a collection of 50 geography-influenced drawings that illustrate different patterns of infrastructure and people-landscape interactions over time. Squares of translucent drafting mylar coated the walls in various patterns, depicting flower cut-outs, blue whales and sketches of Santa Barbara scenery and landscape.

Meanwhile, in the next two rooms, the exhibits, “Ambiguous Histories: Selected Works from the Exit Art Portfolios” and “Art and its Discontents,” featured anomalous sculptures and images of crazed faces, peeping from behind circular shapes.

One of the most popular exhibitions, “Year of Rebellion: The 1970 Isla Vista Riots, Photographs by Joe Melchione,” displayed a photographic journey of the historical student protests of Isla Vista incited by the denial of tenure for Bill Allen, a much-beloved professor, and the failure of the UC government to heed student demands during the ending years of the Vietnam War.

According to Yuning Yang, third-year art major and intern at the museum, professionals curated almost all of the exhibitions.

“Everything here is done by very prestigious people,” Yang said. “It’s a chance to have both student art in the little galleries and have an on-site museum. Otherwise, you’d have to go all the way to [downtown] Santa Barbara.”

Bianca Dunn, first-year pre-biology major, said the “Year of Rebellion” exhibit drew her in, due to its interesting background and implications.

“I came here because I was interested in it and didn’t really know exactly what the whole point of it was. But after going through it all, I feel really moved,” Dunn said.

According to its curator Martin Berger, an Art History and Visual Culture professor at UC Santa Cruz, the exhibition featured images depicting the joy that activism brought to the Black American population in the 1960s. Berger said he wanted the exhibition to educate and inspire students.

“I want students to, one, see that the 1960s were a little more complicated than they may think now because there’s a lot more going on than just the standard picture, and … to understand that young people in middle school, in high school and in college drove a lot of the civil rights movement,” Berger said.

For Berger, today’s political and social issues may have shifted somewhat from the days of the 1960s, but the need for student activism has not.

“They changed America, and I want young people today to appreciate that the issues may have changed for them,” Berger said. “It may be sweatshops, it may be marriage equality, it may be Latino rights — but those issues are still real, and they can still make a difference.”

According to Haruka Yoshizumi, a third-year Japanese studies and art history major who is an international student from Japan, the opening reception and the museum’s exhibitions offered students an enriching cultural and artistic experience.

“I didn’t expect this huge event,” Yoshizumi said. “I’ve only been here for two months at UCSB, but I’m totally happy my university has this huge museum.” 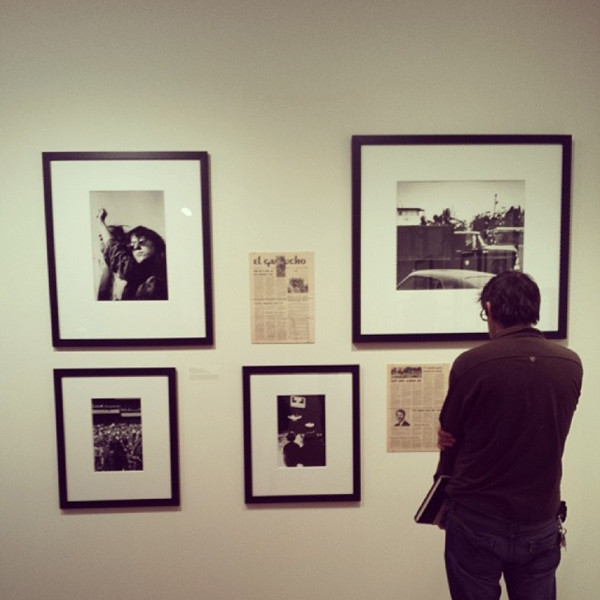 A version of this article appeared on page 1 of October 28, 2013’s print edition of The Daily Nexus.