The Silk Road Ensemble, a Grammy-nominated collective of musicians from multiple continents and musical traditions, celebrated the 15th anniversary of its conception last Thursday, with an evening performance in Campbell Hall.

During the show, audience members were treated to a variety of other virtuoso musicians on instruments ranging from the Indian tabla, a pair of hand drums, to the gaita, which is a bagpipe originating from northern Spain. The Silk Road Ensemble is a branch of The Silk Road Project, a non-profit organization created in 1998 by Yo-Yo Ma to encourage collaboration amongst artists, as well as to foster multicultural education and an exchange of ideas inspired by the Silk Road region from across Eurasia.

The concert opened with musician Cristina Pato playing the bagpipes for “Silk Road Suite,” a complex piece ending majestically with the “Arabian Waltz.”

Angel Meza, second-year chemistry major, said he was surprised by the unique collaborative quality of an ensemble performance, as opposed to the dynamic of a traditional orchestra.

“From the start, it was far more interesting than the normal orchestra concerts,” Meza said.

The Silk Road Ensemble performance featured only some of its performers and composers, each of whom crafted the musical pieces with original compositions and unique brands of storytelling.

Ethan Reul, first-year computer science major, was especially moved by the song, “Empty Mountain, Spirit Rain,” noting the power of its interpretation. In regard to another piece that touches on emotional subjects of love and loss, Ruel said the piece was deeply moving and “symbolic of the pain of losing somebody we love.”

“The music captures the feeling of loss and sorrow, while still remaining hopeful and uplifting, reminding us that life moves on even through our darkest moments,” Ruel said.

The last piece before intermission featured the bagpipes played by Pato and the cello by Mike Block. Before beginning the piece, Pato clarified popular misconceptions about the history of bagpipes, which have Celtic origins in northern Spain, which is coincidently Pato’s own homeland. Both musicians performed “Celtíbera,” a piece focusing on the culture and history of this region in Spain.

Anna Dertouzos, a second-year biology major, especially enjoyed the movement of Pato and Block while the pair performed “Celtíbera.”

“It was really cool, [Pato] really went along with the music,” Dertouzos said. “When she was playing the bagpipes with the other person, they were acting out the music, which made it more interesting.”

With their unusual blend of instruments and rhythmic style, the compositions presented by The Silk Road Ensemble display the group’s varied and unique approach to musical experimentation and cultural blending.

Bridget Acosta, second-year biology major, said the event widened her perspective of the arts, exposing her to artistic practices she had not previously seen.

“This concert broadened my perspective. I learned that people are connected — whether through music or through dance,” Acosta said. 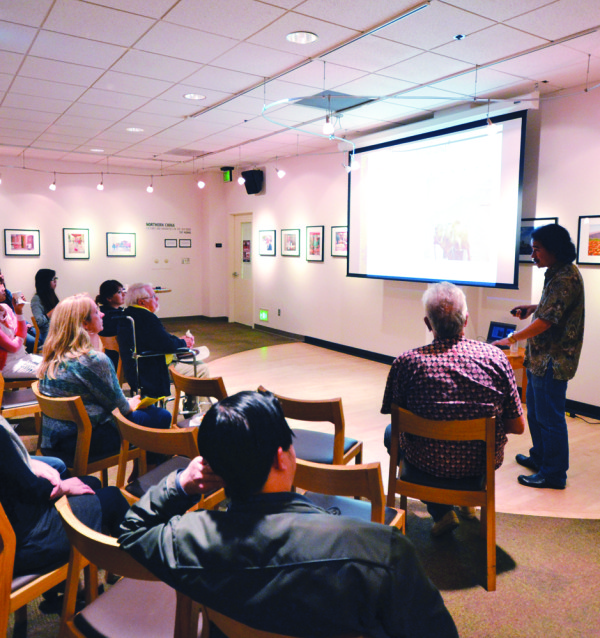 A version of this article appeared on page 4 of October 28, 2013’s print edition of The Daily Nexus.