The Daily Nexus
News
Isla Vista Residents and Police Prepare for Halloween Crowds
October 24, 2013 at 5:00 am by Elliott Wright

With Halloween approaching in less than a week, preparations by students and law enforcement are already well underway, with officials anticipating roughly 40,000 party-goers to join the annual Isla Vista festivities.

To handle the infamously chaotic celebrations of I.V.’s Halloween weekend, local officials are implementing an ordinance that prohibits loud music from being played, while also shutting down streets, calling in law enforcement from outside the county, building barricades and taking other steps to ensure the safety of students. But what they are not doing is installing fences along the notoriously high oceanside cliffs that run along I.V.’s biggest party street: Del Playa Drive.

Five falls have occurred in I.V. in just the last two years alone, sparking concern from many local community members and students who argue that the massive crowds drawn by I.V. Halloween may present the chance for another tragic fall. In response, the Associated Students Office of the External Vice President of Local Affairs and many campus organizations, such as Life of the Party, After Dark, Take Back the Night, Isla Vista Community Relations Committee and the Commission on Public Safety, sought to install temporary fences for Halloween weekend.

However, disagreements amongst the university, county officials and local community members over funding and liability issues have resulted in local officials refusing to install temporary fences.

Beatrice Contreras, an off-campus senator for Associated Students, said A.S. is left in an awkward middle ground because Santa Barbara County and the university do not want to accept liability for injury or death, even while A.S. officials have been seeking to get the fences put in place.

Lieutenant Rob Plastino, head of I.V. Foot Patrol, said he was surprised when the idea of temporary fences was shut down. He said MarBorg Industries — the company in charge of supplying public toilets for the event — even offered to reduce the price of fencing from $12,000 to $2,000.

The fences are not going up this year, but Alex Moore, A.S. External Vice President of Local Affairs, said he is currently working toward a more permanent solution that will end cliff falls in the long run.

“There will definitely be negotiations between us and the county for improving the safety of the cliffside,” Moore said. “Because we ran into funding problems with the university and stakeholders, we will be working hard to find a solution for this year’s Deltopia, as well as future Halloweens.”

As for other security and safety measures, local law enforcement is implementing a 10-day-long festival ordinance, which will bar loud music from being played between 6 p.m. and 7 a.m. The special ordinance requires that all music being played not be able to be heard from the street, and violators of the ordinance will be required to make a mandatory court appearance and pay a $200 to $500 fine.

These officers hold more experience interacting with college students than most city police officers, Moore said. He also said it is necessary to “negate the out-of-town presence,” and local officials and community organizations are doing everything possible to take the necessary precautions.

“Better to overestimate than be underprepared,” he said.

Senior Associate Dean of Student Life Debbie Fleming said she sought out colleagues at local high schools and colleges to spread the word about discouraging out-of-towners from visiting I.V. during Halloween. She said UCSB administrators even ran an advertisement in the college newspaper at Cal Poly San Luis Obispo to deter Cal Poly students from coming to Isla Vista next weekend.

“We ran an ad in the San Luis Obispo’s student newspaper because they are our closest college neighbor from out of town,” Fleming said. “Fifty students have been interviewed who have seen the ad and have thought twice about coming to Isla Vista for Halloween.”

Moore said keeping Isla Vista local and safe is the best way to have fun during Halloween, and he hopes to encourage a community effort to keep I.V. clean after the weekend-long holiday.

“I wouldn’t be stoked if my friends came and trashed my living room. I think that mentality should be applied to Isla Vista,” Moore said. “Pick up some trash. Take care of your community a little bit. You will feel good about yourself while working off your hangover.” 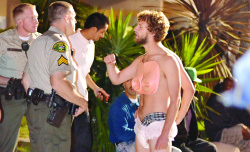 An Isla Vistan is confronted by law enforcement officials. Such sights are common during Halloween season as the city strives to be safer.

A version of this article appeared on page 4 of the Thursday, October 24, 2013 print edition of the Daily Nexus.