Award-winning novelist Tim O’Brien spoke to students and community members at a lecture titled “After the War,” yesterday at Lotte Lehmann Concert Hall to discuss his experiences as a combat soldier in Vietnam and its relation to American wars in Iraq and Afghanistan.

O’Brien, who served in the United States Infantry in Vietnam from 1968-1970, referred to personal excerpts from various works, such as his 1990 book The Things They Carried, in which he addresses the many social, political and religious beliefs that change drastically in a warzone. O’Brien also described the effects of war that are often overlooked, such as its long-term implications for soldiers’ families and broader society.

While voicing frustration with the “hypocrisy” of conflict-advocates who do not participate in ground-level wars, O’Brien also said the absence of the draft that existed during the Vietnam War has allowed many Americans to neglect the negative repercussions of conflicts like those in the Middle East.

“When the wolf is not at your door, it’s easy to go bellicose and belligerent in your rhetoric,” O’Brien said.

During the lecture, O’Brien addressed the audience with a question concerning the morality of supporting a conflict while refusing to endanger oneself or one’s loved ones.

“Or do you want someone else to do the killing for you?” O’Brien said. “And the dying for you? Is that what you want?”

O’Brien also said the experiences of veterans in the aftermath of post-9/11 wars compare with veterans of the Vietnam War. During the Q&A session, O’Brien said he found common ground with the experiences of an Afghanistan war veteran who asked the author a question about O’Brien’s experiences upon return from Vietnam.

According to O’Brien, storytelling played a vital role in helping him cope with his post-war transition back to civilian life, and he recommended that veterans of today’s wars follow suit and tell their own stories. He added that the loved ones of war veterans should also help them with this process, as he said the best thing people can do for veterans who are struggling with post-traumatic stress disorder is to listen to them.

First-year psychology major Danielle Miller said she enjoyed the lecture since she had previously read O’Brien’s work, “It was cool hearing someone speak that you’ve read.” 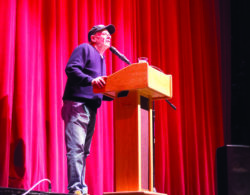 Tim O’Brien addresses the audience. The Vietnam War veteran and award-winning novelist discussed the aftereffects of war on soldiers and their families.

A version of this article appeared on page 3 of the Wednesday, October 23, 2013 print edition of the Daily Nexus.