The Daily Nexus
News
Nonprofit Holds Music Festival in SB
October 21, 2013 at 5:00 am by Carissa Quiambao and Hannah Nelson

Held last Thursday through Saturday at the Canary Hotel, the three-day street festival featured block parties, art exhibits, a music and technology conference, food and drinks, along with live music from a lineup of over 55 local artists. The New Noise Music Foundation, a nonprofit founded in 2009, aims to act as a creative medium by which Santa Barbara residents, particularly youths, can engage in music through the foundation’s established events, including concerts, workshops, lectures and volunteering programs. 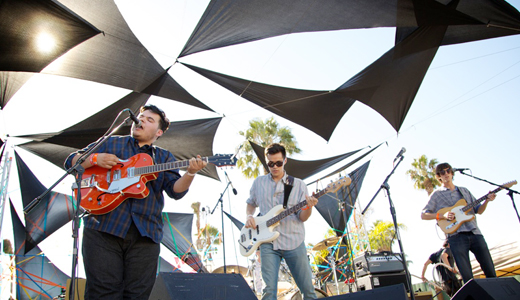 According to Ruben Zarate, lead singer for Dante Elephante (pictured above), the surf-pop band from Santa Barbara plans to release a seven-inch record with UCSB radio station, KCSB. “KCSB’s starting our record label, so we’re releasing a seven inch with them, and then we’re going to start recording in November for our full length and then hit the road,” Zarate said.

This article appeared on page 4 in the the Monday, October 21, 2013 print edition of the Nexus.
Print