On Tuesday, the Education Abroad Program hosted an All Worlds Fair celebrating cultural diversity on campus and informing students about opportunities to study abroad.

To date, 86,000 UC students have participated in UCEAP while 27,000 international students have studied at a UC campus. UCEAP is currently active in 39 different countries, with six new study abroad programs available for the 2014-2015 academic school year. New programs include the addition of two new countries — the Dominican Republic and Indonesia — and more opportunities to study abroad in Canada, Germany and England.

During the All Worlds Fair, UCEAP members, such as alumni and EAP advisor for Australia and New Zealand Ryan Riffenburgh, spoke to students about the personal and life-enriching benefits of studying abroad.

“I wanted to go to that part of the world, and I chose New Zealand because my school had a small, close-knit community that I became a part of,” Riffenburgh said. “I built solid relationships with my professors, and I was able to be in the outdoors a lot, which I love.”

In addition to the 285 study abroad program options currently available, the new UCEAP program in the Dominican Republic will allow students to do field work in urban and semi-rural communities and to gain insight into healthcare in the Hispanic Caribbean through the UCEAP Community Public Health Program. Likewise, students that choose the new study abroad program in Yogyakarta, Indonesia will be able to explore Indonesian development and its diverse contemporary and historical culture.

Students like second-year English major and French minor Pritika Nandakumar said the fair piqued the interest of many students, as they were given a more personal look at the experience of studying abroad.

“It was also extremely encouraging that the returnees came and shared their stories with us,” Nandakumar said. 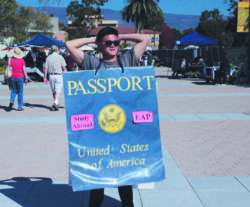 UCEAP members shared their personal experiences studying abroad during the All Worlds Fair on Tuesday. The event informed students on how to take part in EAP’s study abroad programs.

A version of this article appeared on page 3 of Thursday October 17th’s print edition of the Daily Nexus.