The Daily Nexus
News
UC Campuses To Become Smoke, Tobacco-Free as of January 2014
October 15, 2013 at 5:00 am by Chelsea Brandwein

UCSB is currently making the shift to going totally smoke-and-tobacco-free, as all universities in the 10-campus UC system will be officially designated as non-smoking beginning Jan. 1, 2014.

On the first day of the new year, any tobacco and tobacco-free products smoked through cigarettes, pipes, water pipes and hookahs used on campus — in addition to smokeless tobacco and unregulated nicotine products such as “e-cigarettes” — will be in violation of the policy. Adoption of the policy will join the UC with 1,100 other colleges and universities throughout the U.S. that have already implemented such regulations to limit second and third-hand smoke exposure on campus. The UC system’s transition to becoming completely smoke and tobacco-free was first announced by former UC President Mark G. Yudof back in January 2012.

According to a statement released by the UC Office of the President, approximately eight percent of UC students and 10 percent of UC employees light up, and these figures place the University’s members below the respective national averages of 16 and 12 percents.

UCSB’s new Policy and Procedure regulations states that smoking will be prohibited in all buildings owned, leased or managed by the university, in addition to all vehicles owned or operated on university grounds.

Earlier this year, UCLA was the first UC campus to implement the smoking ban, and some other schools, such as UC San Diego, have followed suit, enacting smoke-free policies before the ban’s official start next year.

However, the new ban will have other far-reaching effects, as it will include a ban on tobacco-product advertising in on-campus publications and university-owned facilities, with the exception of non-campus-based newspapers and magazines on sale in campus stores. The sale or distribution of any smoking paraphernalia on campus will also be prohibited, although popular campus stores like the Arbor or the Corner Store already do not offer such products.

“As a national leader in healthcare and environmental practices, the university system recognizes its responsibility to exercise leadership through the creation of a smoke and tobacco-free environment for all students, employees and visitors at all UC campuses,” Longbrake said in an email.

Student reception to the upcoming ban varies, however, as some students acknowledge the health benefits of going smoke-free, while others see the new ban as an infringement on individual rights.

Third-year chemistry major Nilou Sarvian said she looks forward to experiencing the change in campus climate, as the new policy may encourage some students to drop the habit.

“I’m really happy that UCSB has stepped up and is making this change,” Sarvian said. “It inspires a healthier atmosphere when you don’t have kids running out of section or lecture for a quick smoke.”

However, second-year feminist studies major Kelty Kauffman said the new regulation “doesn’t make sense” since it interferes with an activity that everyday Americans are legally allowed to engage in.

“Really, it seems like banning people from doing something adults have every right to do in the place where they spend the majority of their time, is invasive,” Kauffman said.

While the ban may seem like a violation of basic rights, first-year chemistry major Lex Jung said it acts as an incentive for him to quit smoking.

Nonetheless, some students are still unsupportive of the ban, as second-year biopsychology major Lakshmi Ganne said it is a limitation to one’s right to “self-expression” and other individual liberties.

“Obviously, cigarettes aren’t illegal in the United States, so why should smoking them be illegal on campus?” Ganne said. “The main argument that people have against people smoking in public areas is that the second-hand smoke harms people who are walking by, but if they have designated smoking areas, then the people who don’t want to be exposed to smoke can just avoid those areas, and that just limits the harm to anyone passing by.”

UCSB administrators are notifying students of the new ban through this fall’s Gaucho FYI sessions, which Longbrake said will also aid in outreach efforts in the coming months. Planned outreach methods include mass e-mails, social media channels, signs and flyers.

—Tiana Miller-Leonard contributed to this article.

A version of this article appeared on page 1 of Tuesday October 15th’s print edition of the Daily Nexus. 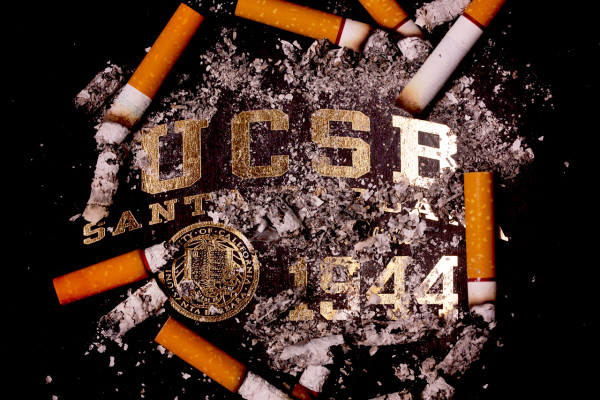 Smoking is a bad idea…but so is eating Panda Express every single day for lunch. We should ban that as well. And coffee. And cars.

One thing is certain, the Public Health Mafia is making a lot of easy money, by teaching people to hate smokers. Their primary weapon is fear. Aside of dispensing fear to promote their lobby campaigns what else have they given us? Risk is a measure of emotional distress, Pure science is something else entirely. How often they rely on a self perpetuating fear factory known as a Medical Journal, where a risk assessment is published, [unless it was produced for the mainstream media directly as a promotion] and how little they trust observations, says a lot, of whom we place… Read more »

“False equivalence” would be like placing second hand smoke in the same risk factor valuation as nuclear radiation, when more equitable risk factors are limited to hamburgers and soda. With the risk diminished extensively, when diluted by hundreds of billions of cubic meters of outdoor air. But only if honesty and integrity are considered important. Otherwise fear sells more efficiently than sex and there is a “want” not a “need” to protect non smokers from second and third hand smoke. The so called “science” was settled by committee, back in the 70’s when Sir Godber announced to the NIH that… Read more »

Name a single person who died as you describe from casual exposure to tobacco smoke. The numbers you rely on are statistical with an absolute bias well entrenched. Search “Enstrom and Kabat, BMJ” if you have any argument with the existence of that publication bias. Cigarette smoke is a poorly guarded excuse for an undermining of personal autonomy, by coercion. It is not meant as a ploy to con smokers, it is an ad campaign that targets gullible non smokers. Fool enough to accept any lie that serves their comfort. The seat belt was once the example that legitimized government… Read more »

Take your meds and don’t forget your pimple cream.

Maturing beyond puberty, will help develop your comprehension skills and all that persistent confusion.

In the mean time you always have your video games.

Quantify “there is no safe level of tobacco smoke”

As the ads describe it, Nuclear radiation has known and established safe levels of exposure.

Carcinogenic risks by consuming a char broiled hamburger are much more equitable in a true observational sense, beyond the drama and sound bites.

Comparisons? Anyone can do a Google search and no doubt your response will call this “cherry picking” in ignorance of an obvious abundance information; The Surgeon General’s meta analysis, while doing some quite astonishing cherry picking at the time, estimated an increased lifetime risk for those most exposed at the most extreme levels at .13 increase above no risk. Duly reported in the funny papers,as a 13% increase, which was not entirely forthcoming considering the same methods would show a 25,000% increased risk for wearing a bra and breast cancer association. Acceptable risk in air, food, water and medications is… Read more »

@Klein Driving is a privilege that could be rationed according to necessity in order to reduce pollution and improve safety. I presume that Klein would also support road use bans. What doesn’t make sense to me is how someone who is so sensitive to false equivalencies can embrace a program that doesn’t bother to distinguish between e-cigarettes and tobacco cigarettes.

If driving is believed a privilege. Who grants your privileges? Under what right or color of law does that authority rest? None, in a free and democratic constitutional nation. If that Government is just and credible. No government may rise above the constitution the law or the courts. Without the people’s endorsement. Governments give you nothing, that they don’t first take away. You are being conned. Your rights are far more valuable than a temporal “privilege”. Repeating their promo and nonsense makes you a dupe. Selling us all short. Learn to distinguish, who your real friends are. Voting for a… Read more »

If you require “protection” from tobacco smoke, the later is confirmed. If you are crying for self sanctimonious comfort you have much larger social problems that require attention.

Get over yourself, tobacco smoke much less e-cigarette smoke or someone using chew, is among the least of anyone’s worries in an outdoor environment. The comparison to a hamburger as a larger risk is legitimate, in direct comparison.

Do you fear the sight of burgers as well? Or is it seeing other people that scares you?

Mommy’s apron strings, can only be stretched so far.

“The rest of the story is that the UC smoke-free policy reeks of hypocrisy, intolerance, and moral judgment of others.”

All things that are considered ignorant. Isn’t the idea of education to eliminate ignorance through understanding?

Is this institution now so convinced that their own institution, is ineffective and promoting bans are the only solution here?

Only because education is now considered secondary to domination and a firm hand?

Because we say so?