Former Secretary of State and political scientist Henry Kissinger came to a seaside luncheon at Santa Barbara’s Coral Casino to speak about topics ranging from international relations with Syria to American immigration policy.

Hosted by Westmont College, the elegant luncheon cost a hefty $1,500 per person and presented a ‘fireside chat’-style talk led by Westmont College President Gayle Beebe. The 90-year-old Kissinger — known for opening international relations with the People’s Republic of China and negotiating the Paris Peace Accords, amongst other major political moves — fielded questions regarding chemical weapons in Syria, the U.S. approach to resolving conflict in the Middle East, contemporary immigration issues and the concept of American ‘exceptionalism’.

For Kissinger, who acted as National Security Advisor and Secretary of State throughout the Cold War era, Santa Barbara is a pit stop between Washington and Moscow, where he will head to next to speak with Russian President Vladimir Putin.

When speaking about U.S. intervention in countries like Iraq, Afghanistan and Syria, Kissinger said continuous entanglement can be detrimental to a country’s reputation. He said homeland interests should reign supreme, and the U.S. should stray away from the worrisome threat of conflict.

“Once we are in a war, if we just withdraw from it, we have to consider what that does for the credibility of the United States,” he said.

With immigration reform being a hot-button issue in American politics, Beebe asked Kissinger — a German-born Jewish-American whose family migrated to the U.S. in 1938 — what his views were on modern immigration.

“When I came here, the idea was I had to go to George Washington High School in New York. Nobody said, ‘Give him instruction in his own language,’” Kissinger said. “I’m sympathetic to the immigration issue, but one has a right to defend its borders.”

The world-renowned politician also gave his view on the rise of the Internet and its implications in post-modern society, saying, “I’m bothered by institutions like Google that have a monopoly on information … We have to restore some concept of objective truth.”

Tom Knecht, a political science professor at Westmont College, said Kissinger’s discussion shone light on his advocacy of ‘realpolitik’ — the practice of diplomacy and policymaking in which “the national interest drives our foreign policy decisions.” Knecht said this perspective is especially interesting in light of the fact that many contemporary politicians do not advocate this style of decision-making.

“Recent Secretaries of State have not come from that same perspective,” he said.

According to Westmont College Spokesperson Scott Craig, although Kissinger can be a controversial political figure, he has made a profound mark on American history.

“Being 90 years old and in a position of power for as long as he has, he’s certainly had his thumb on the pulse of foreign affairs for a long time — for decades,” Craig said, “I think the experience and expertise he brings to the table is unlike anyone else.” 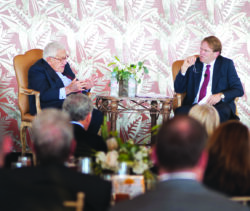