Late last month, three sharks were seen feeding upon a Minke whale carcass in the middle of the Santa Barbara Channel. But the gory incident comes as no surprise, with the anniversaries of two Santa Barbara County shark attacks coming up later this month.

In the last three years, a total of four fatal shark attacks have occurred in the United States, and the Santa Barbara attacks make up half of these attacks. They are also the only incidents that involve Great White Sharks and both occurred in ocean waters near Vandenberg Air Force Base, which is located in northern Santa Barbara County, near Lompoc. UCSB student Lucas Ransom was fatally bit while body-boarding in 2010 and Orcutt, California resident Francisco Solorio was attacked while surfing in 2012. Both attacks were at Surf Beach, which is about one hour north of Santa Barbara City, and 39 year-old Solorio’s attack was on Oct. 23, 2012 — just one day after from the anniversary of 19 year-old Ransom’s death.

Ralph Collier, founder of the Shark Research Committee and director of the Global Shark Attack File, said the timing of the attacks is not necessarily coincidental, as most shark attacks happen around the same time of year.

“The majority of shark attacks, more than 50 percent, take place in three months of the year — August, September, October,” he said.

Chris Lowe, marine biology professor and director of the Shark Lab at Cal State Long Beach, explained that during fall, adult Great White sharks return from Hawaii and the Central Pacific to feed. The sharks leave California in January as the pinniped (which are mostly seals population) decreases, and adult males spend eight to nine months away while females can spend a year and a half or more. This explains the population rise during this three-month period, as well as the fact that the habitat surrounding the Channel Islands is conducive to pinniped growth and these animals are prey for sharks.

In 2003, Collier published Shark Attacks of the Twentieth Century: from the Pacific Coast of North America, a book analyzing the shark attacks in the region. Between 1900 and 1999, there was a recorded 108 shark attacks and since 2000, there have been 74 confirmed attacks, showing an obvious increase. But according to Collier, this does not necessarily mean the oceans are becoming more dangerous. Collier said he has interviewed countless beachgoers who have had encounters with sharks with absolutely no physical contact.

Lowe, who has been studying sharks for 25 years and dives frequently, said he has never had an encounter with a White shark. He said the growing number of people using the water recreationally could be the reason for the increase in attacks.

“More people go in the water for recreation than ever before,” Lowe said, “And the numbers increase every single year.”

With more people in the water, sightings and encounters will increase, however it is important to note that sharks do not see humans as a food source, Lowe said. If that was the case, attacks at beaches such as Waikiki, Santa Barbara Beach, Huntington Beach and Santa Monica would become common occurrences, according to Lowe.

Collier, who works together with Peter Howorth at the Santa Barbara Marine Mammal Center, tracks sightings, encounters, and attacks of both humans and pinnipeds by sharks. Collier said being in a shark’s presence does not necessarily mean one is prey.

“We might find ourselves in the water at the same place and same time a shark is moving through the area. That doesn’t mean he is hunting us,” Collier said. “We have a lot of encounters, but we only average four or five attacks on humans per year.”

To put the shark attack statistics into better perspective, Collier said each year, an average of 33 people are killed by dogs in the United States.

Fourth-year communications major Theo Lewitt, who heads the UCSB Surf Team, said most of the events are held in beaches close to San Diego and Orange County due to wave conditions. However, this year an event will be held in Ventura, which is the farthest north universities will be competing.

In reference to White sharks, Lewitt said he had his first encounter with one this summer in Manhattan Beach. While working a surf camp, Lewitt and his friends spotted some juvenile White sharks in the water, but rather than being afraid of the sharks, he and his friends were interested to learn more.

“Later that afternoon, we were back in the water, and every other time we saw the shark, the scary part went away and the feeling of fear was replaced with intrigue instead,” Lewitt said. “It gives you a new respect for sharks. They are just doing their thing, and we just happen to be there.”

According to Lowe, much of the fear surrounding sharks comes from exaggerated media depictions of the dangers they pose.

“Discovery Channel thinks we know everything about sharks, and that’s where it’s not true,” Lowe said. “All the hype and fear is largely built on by the media. It makes it harder to get research funds to do this work.”

According to Collier, sporadic shark attacks should not deter people from enjoying the ocean, and instead, beachgoers should just take precautionary measures.

“If you want to go in the ocean, go ahead and go. Pick and choose the area in which you are going to engage in your oceanic activity carefully,” Collier said. “Don’t go to swimming off the pinniped rookery at Carpinteria Reef.”

According to Lowe, treading the water safely is all about staying conscientious and “smart” about where to go.

“Every time you go in the water you have to be aware. Know where you are surfing, what conditions are like, and what animals are there,” Collier said. “It’s kind of like doing your homework for class.” 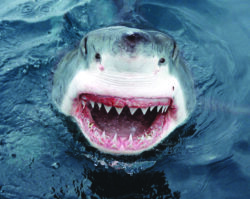 Sharks were spotted in the SB Harbor in late September. According to shark expert Ralph Collier, most shark attacks occur around this time.

A fine article. Point is well made that the Discovery Chanel, hyping Shark Week, scares us all more than it educates us. Statistically, our chances are of being harmed by a shark are far less than being injured by a dog.

not really ,ive been bit by dogs half a dozen times.actually ,when i was in 2nd grade a german shepard bit me in the stomach and shook me until my dad heard the comotion and chased the dog off.
if thats the gradeing curve maybe we should follow australias lead and start blowing them away.

Even though he did only use on statistic there are many he could of included as well, but the main point for the essay I feel is for people to realize they need to educate themselves before jumping in the water during certain months or times of day. According to the research of the shark foundation in the US and Canada alone 40 people are killed a year by pigs. The probability of you being struck by lightning in the US is 16 times higher then being bitten by a shark. To bring in getting a splinter versus being hit… Read more »

if lightning is the barometer you are useing then i’m in trouble.
i have been approached by sharks in santa barbara(in a inflateable boat) and hit by lightning in the rocky mts.
the lightning wasnt nearly as scary.

the article is slightly jaded in behalf of the sharks. i wonder if the amount of dog attacks in santa barbara county equals shark encounters?
there have been a few times we heard of sharks,seen carcases,and had a seal try to climb in our boat with a bloody head and had fishermen tell us of sighting them at the ranch.