The Daily Nexus
Artsweek
Local Band To Perform at SOhO Tonight
October 10, 2013 at 5:37 am by Roxanne McNally 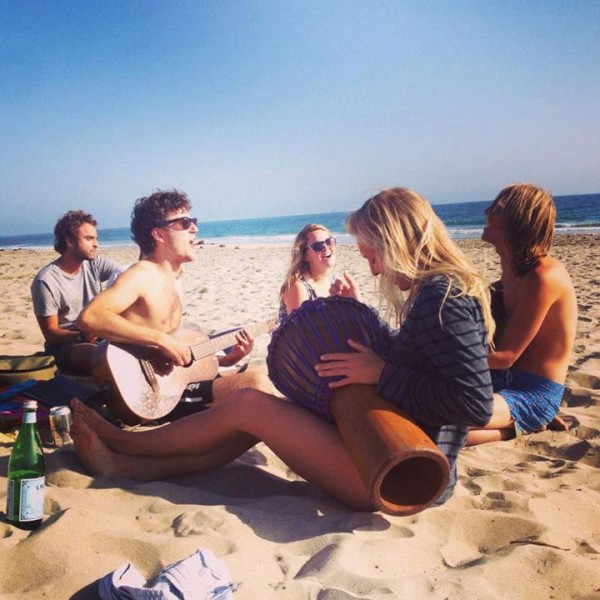 Yonder was formed during winter quarter last school year, when lead vocalist Erisy Watt scrambled to find a band after telling a venue owner that she already had one. Watt got together with guitarists/bassists Ferrara and Scott Hildebrand and drummer Scott Pritchett. Ferrara became lead guitarist and Elliott Wobler joined as bassist when Hildebrand left for Korea (he’s coming back eventually). All current members are third-year UCSB students, except for Pritchett, who graduated last year.

The band frequently performs at house shows and parks in I.V., and also at The Savoy downtown. They played SOhO twice over the summer, once with the The Honeysticks and once on their own.

The band certainly sets themselves apart from the typical reggae-rock heard around I.V. Ferrara describes the band’s style as “folk music with some soul.”

“We can get loud, but we’re mostly mellow [with] good vibes,” he said. “You can dance to it, or you can listen to it in any mood, any situation, and it would be enjoyable.”

The band’s influences range from Bob Dylan and Joni Mitchell to Jack Johnson and Tthe Lumineers. Ferrara also added Conor Oberst of Bright Eyes as an afterthought to this list, although an important one.

Norah Jones seems to also be key when it comes to the band’s vocals. Ferrara spoke highly of Watt, the band’s soulful, Nashville-born singer. He made the comparison to Jones a number of times, but also emphasized Watt’s songwriting abilities and natural talent. While the other members have had years of training and experience, Watt has only been making music for three or four years, playing mainly at open mics.

Watt’s voice has impressed more than just her fellow band mates. Fourth-year environmental studies major Anbareen Shefa, who saw the band perform at the Isla Vista Artisan Fair last summer, said, “The vocalist was phenomenal. She had the voice of an angel.”

Shefa also commented on her past experiences with SOhO: “I like how it’s a bar, restaurant and club, kind of like a house of blues but more intimate.”

SOhO’s guests can expect to hear much of the band’s original music tonight, but they also play “oldsy” covers such as Smokey Robinson’s “You’ve Really Got a Hold on Me.”

Yonder has recorded seven of their songs, written mainly by Watt, and are in the process of mixing the tracks. They hope to have an EP available at the show tonight.

SOhO’s shows are often 21 and over, but you need only be 18 to enjoy tonight’s musical delights. Doors open at 8 p.m. and the show begins at 9:30, so get your tickets and get ready for an electrifying Thursday night.

A version of this article appeared on page 8 of October 10th’s print edition of the Daily Nexus.