On Oct. 3 many people from across the Santa Barbara community, as well as UCSB students, gathered at Campbell Hall to watch UCSB Arts & Lectures present the Masters of Bluegrass.

The MOB, as they sometimes refer to themselves, consists of five exceptional bluegrass players with extensive histories as experts in this genre of music that fans hold so dear. Del McCoury brought the group together as lead vocalist and guitarist. His brother Jerry McCoury played the beautiful upright bass left on the stage at the start of the show. Bobby Osborne, known for playing with his brother Sonny as the Osborne Brothers and a member of the Grand Ole Opry, contributed his strong voice and mandolin. Bobby Hicks, a contemporary of Bill Munroe and Ricky Skaggs, soared on the fiddle. Finally, crowd favorite J.D. Crowe rounded out the group with his essential banjo-playing. The band entered the stage and jumped right into their set, playing a hearty rendition of “Blue Ridge Cabin Home” by Flatt & Scruggs.

I get excited when I walk into a theater and see an upright bass lying on the stage, waiting, creating atmosphere. It’s a sign of good things to come, and McCoury and his buddies did not disappoint. I was immediately pulled into the music, but I was also drawn to these men and the aura that surrounds musicians who have played thousands of shows in their lifetimes. The mood of the best bluegrass concerts embodies this mix of confidence and play; there is no nervousness, no big pressure to show off. It’s obvious that the players are not only there to impress you. They do impress, of course, but they’re up there to have fun.

McCoury’s banter between songs set the mood for the evening as soon as the first song ended. “We’re gonna try to entertain you for a while,” he said, laughing. And the audience – not a fully packed Campbell Hall, but loud and enthusiastic enough to disguise that fact – received the group’s offerings with open arms.

Fiddler Bobby Hicks was certainly another crowd pleaser, with his humble stage-presence and deep, sad voice, rolling over the audiences on just a few numbers. The players were all dynamic; each person led vocals for one or more songs, or at least took part in a couple choruses. McCoury, a member of the Grand Ole Opry, seemed to be the group’s conductor in a way, but never stole the spotlight from the other players, which felt appropriate for the kind of evening it was. Bluegrass is not flashy.

Flashy can be very attractive. Most of us have found ourselves at some point drawn to a person in a split second of seeing them, knowing nothing about them, not really feeling like we need to know more.

And I love bluegrass for these reasons: for never failing to comfort me and fill me with joy, for the sense of hopefulness under even its most melancholy standards.

Even Osborne, dressed in a dazzling blue suit and hat, his sheer speed and precision while picking the mandolin a sight to behold, approached the microphone humbly when McCoury introduced him towards the start of the show, telling us, “It’s my honor to be here with you all.”

Osborne and his brother wrote the Tennessee State Song, “Rocky Top,” and his voice was also striking: soaring and yearning, bright and clear despite the slight, charming twang.

Bluegrass is love that gets better with age.

These men are the finest of musicians and entertainers. They played more than 20 songs for us that night, and obliged us with another encore. And I think that the listeners, both old fans and new inductees to this beautiful tradition, realized that we were being invited into a special space, and that the honor was really all ours. 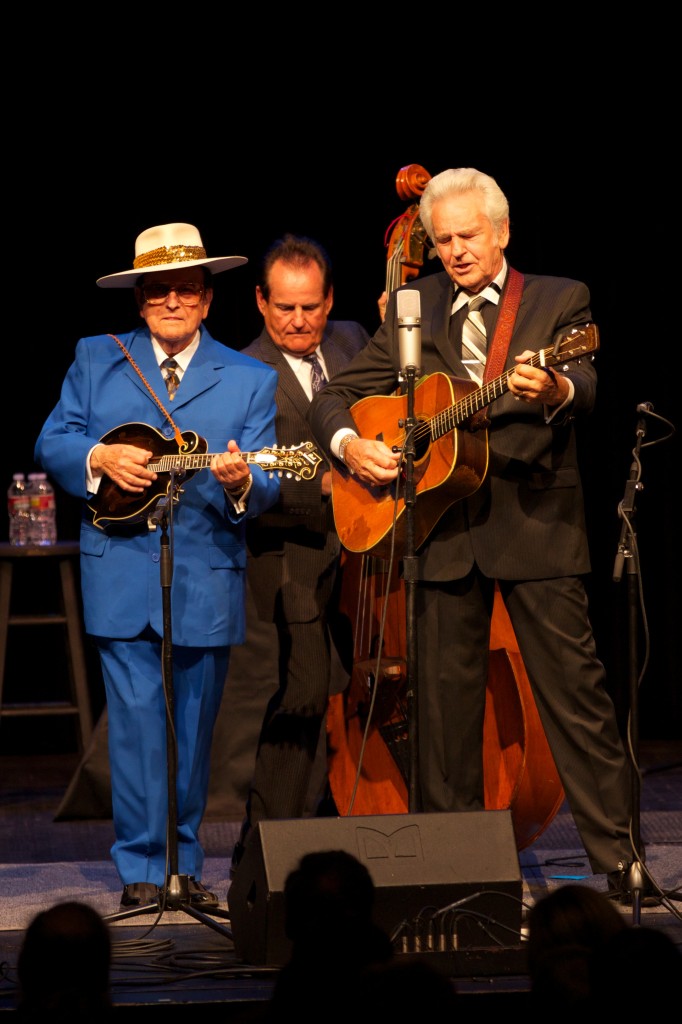 A version of this article appeared on page 9 of Thursday October 10, 2013′s print edition of The Daily Nexus.