The Daily Nexus
News
Library Renovation To Improve Facilities, Add Space for Students
October 8, 2013 at 5:00 am by Peter Mounteer 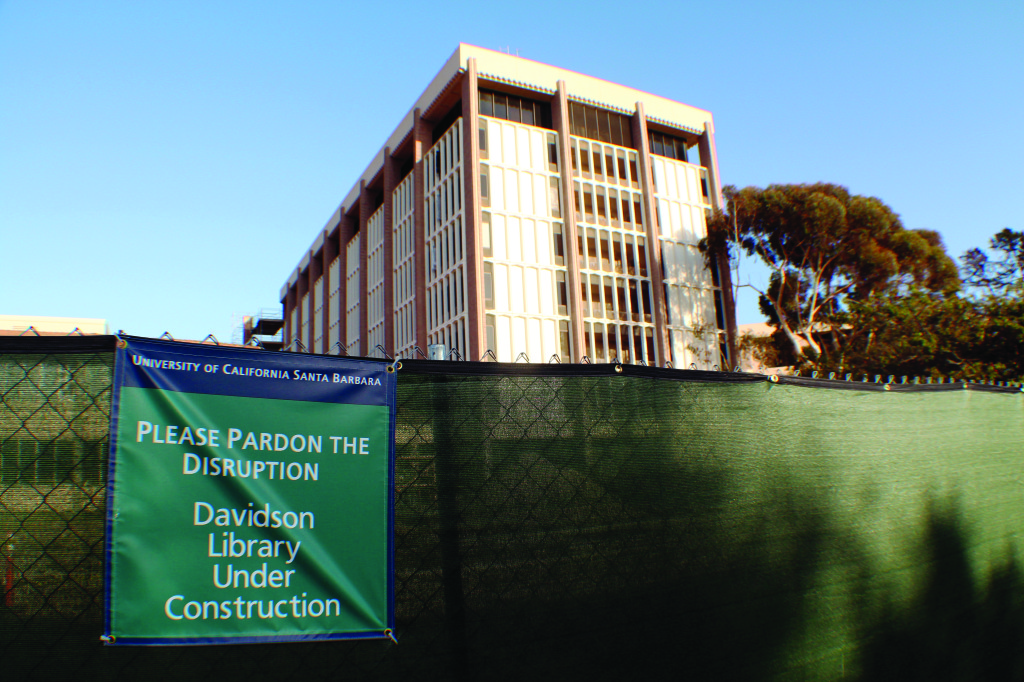 Signs warn students not to trespass into dangerous construction zones. Renovations of the entire library are expected to be completed by 2015.

As large areas of Davidson Library continue to be under construction, the official start to the UCSB Library Addition and Renovation Project was commemorated in a university ceremony last Tuesday.

“The library held a design charette where we got together with students and brainstormed about what an ideal library would be like,” Metzger said.

Metzger said many students said the library did not have enough electrical outlets, which is particularly true of high traffic times for the building, such as Finals Week and Dead Week.

While general plans for the project have been underway for over a decade, Metzger said students are still welcome to make suggestions and express other concerns regarding the outcome of construction. She said that library administration is considering inviting more student input that is concerned with renovation furnishings by hosting activities that will welcome such input, such as a testing process for furniture.

Since the last renovation in the 1970s, enrollment at UCSB has increased dramatically from around 13,000 to about 22,000 students. So Davidson Library, as it is in its current state, was not designed to accommodate the large pool of students that the university currently holds.

Marcos Aguilar, a fourth-year English and philosophy double major who has worked at the library information desk for three years, said the expansion project is the greatest campus effort to accommodate UCSB’s “huge increase in the student population.”

“The library is the biggest building that’s trying to meet that change,” he said.

The current stage, Phase I, involves seismic strengthening of floors one through seven of the library tower, as well as the complete gut renovation of the original two-story building, which was first built in 1952.

Phase II, which is expected to last from November 2013 to June 2015, includes the construction of a completely new three-story building on the north end of the complex. The addition will provide 60,000 square feet of space to be used for a new Special Collections facility, and it will also be used as faculty and student collaboration spaces and bookable study rooms.

The first two floors of the future three-story building will house a 24-hour information commons, continuing the overnight study program the library launched last year. Basic library services such as internet access and use of printers and photocopiers will be available there as well.

Phase III, which is scheduled to be a six-month construction period beginning in June 2015, will include the construction of a new campus walkway called “The Paseo.”

University Librarian Denise Stephens said the renovations should help the library keep up with the scholarly demands of 21st century college students, who do much of their research using digital sources.

“It has been 35 years since the library was last renovated, and during that time much has changed in how information is organized and delivered and in how scholars and students conduct their research,” Stephens said.

Chancellor Henry T. Yang, who has seen the project develop since the early years of his administration, said he looks forward to the research facilities the renovated library will provide.

“Our library’s reinvention will allow us to increase the breadth and depth of our research collections and will provide our students with enhanced access to innovative exhibits, programs and services,” Yang said in an email.

To address construction disruptions, a large fence was implemented to surround the entire construction site. However, it closes off the previous two-story building, which was a common conduit for students and faculty to walk through when traveling to or from many of the physical science buildings.

A version of this article appeared on page 1 of Tuesday October 8, 2013′s print edition of The Daily Nexus.

Really? “…complete demolition of the original two-story building”?? This isn’t mentioned on the Library web site. They seem now to be doing some inside and outside removals, but I’m surprised the entire two story building is going to be torn down.

There is no demolition happening — that is a mistake in the article. The two-story building is being gut renovated and all existing structures will remain.