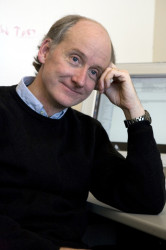 Researchers from UC Santa Barbara, the Morgridge Institute for Research at the University of Wisconsin–Madison and Northwestern University recently created a technique to target and correct genetic mutations in the genome more efficiently.

The study, published on Aug. 12th in the Proceedings of the National Academy of Sciences, holds promise for advancements in regenerative medicine, drug screening and biomedical research, including the treatment of breast cancer and Parkinson’s disease.

James A. Thomson, co-director at UCSB’s Center for Stem Cell Biology and Engineering and professor in the Department of Molecular, Cellular and Developmental Biology, Erik Sontheimer, a professor of molecular biology at Northwestern University and Zhonggang Hou of the Morgridge Institute for Research spearheaded the project, along with collaborators Nick Propson, Sara Howden and Li-Fang Chu from the Morgridge Institute for Research.

CRISPR are loci with direct repeats in a genetic sequence that act as an immune system in prokaryotes. CRISPR associated proteins, Cas, defend the bacterial cell by splitting sections of intruding viral DNA. Cas9 is an enzyme capable of pairing with an RNA transcript to target specific DNA sequences in invading viruses and cut them up, thus preventing harm to the bacterial cell.

The researchers have used this understanding to devise a method for directing Cas9 to cleave a specific damaged or mutated DNA site in human cells and then remove, repair or replace the sequence by an RNA-guided mechanism.

Zhonggang Hou, lead author on the study, said that his team used the CRISPR system in the bacteria to produce Cas9 and specifically cleave the desired DNA sites targeted for repair.

“The technique is called gene repair by CRISPR. This is done by introducing a targeted DNA double strand break in the region of interest on the DNA,” said Hou in an email. “This technique can potentially correct genetic mutations in the genome.”

The genomic engineering was performed on human pluripotent stem cells, which proliferate indefinitely and can differentiate into any cell type. By extracting the stem cells from skin or blood, they were reprogrammed to become specialized cells whose genome the researchers could manipulate.

The Meningitis Foundation of America (MFA), a national organization, would like the public & media to know that information is available regarding the diagnosis, treatment & prevention of meningitis. MFA was founded in 1997 by parents whose children were affected by meningitis. In addition to supporting vaccination & preventing meningitis, the MFA provides information to educate the public & medical professionals so that the early diagnosis, treatment &, most important, prevention of meningitis, will save lives. Meningitis is a dangerous & often times fatal inflammation of the brain &/or spinal cord that can leave survivors with serious life-long physical problems… Read more »