The Daily Nexus
News
High Demand for UC Bonds Lead To Soaring System-Wide Savings
October 1, 2013 at 1:28 am by Suzanne Becker

University of California officials recently announced that the 10-campus UC system will save over $1 billion through recent bond sales, with these recently sold assets now offering the University an even higher rate of annual savings than initially expected.

While university officials expected the bond sales to provide the UC with an estimated $80 million in annual savings, there will actually be an even higher rate of savings — an estimated $100 million in yearly savings for the next 10 years. After this period, the UC could expect to see between $17 million to $21 million in annual savings for the following seven years, according to a statement released by the UC Office of the President (UCOP).

The first of the bond sales were made beginning Sept. 23 in New York City, and the sales are expected to continue until this Wednesday.

The series of bond sales will essentially restructure the UC system’s $2.39 billion in debt, and they were authorized “in connection” with the 2013-14 UC budget approval, according to a UCOP statement. Favorable market conditions and a higher-than-expected demand for bonds allowed for a $20 million jump in estimated annual savings — from $80 million in yearly savings to $100 million — according to university officials.

UC Office of the President Spokesperson Dianne Klein , who called the bond sales “terrific news” for the University, said the UC’s large offering of bonds is unprecedented for colleges and universities nationwide.

“No other institution of higher education has issued bonds of this magnitude,” Klein said. 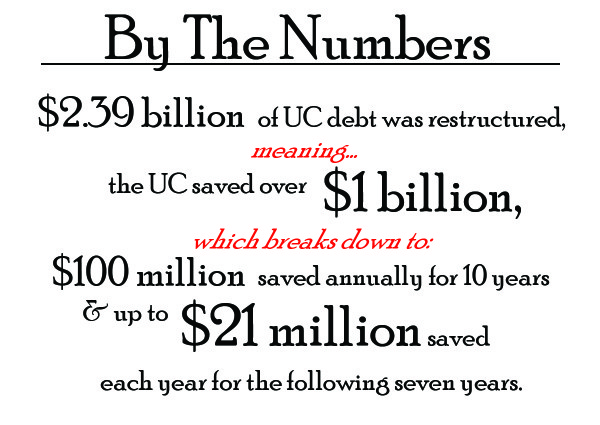