This Friday, the Arlington Theatre will host a one-day transformational music, art and theater event known as “Lucidity Presents: Rising Vibes for the Universe.”

Along with live music and acrobatic performances, the giant outdoor party and ‘open-source’ multimedia experience will serve up locally grown organic foods and feature an array of art forms for attendees to enjoy. Live performance art will be showcased alongside projection art, painting, free healing services and a keynote address along with a screening of the Bloom Series, a documentary on the growth of transformational culture.

Jonah Haas, Marketing Director and Co-founder of Lucidity Festival, said Friday’s event marks a form of theater performance unprecedented by similar events, describing it in an email as “unlike any theater show anyone has ever attended.”

“We are taking over the inside and the outside of the Arlington Theater and creating a rich immersive environment for those who are young at heart to play, grow and dream with us,” Haas said. “Imagine the best costume party you’ve ever been to, with a Cirque Du Soliel caliber performance, bad-ass music and a wide open invitation to express yourself freely and to be your most authentic self.”

According to Haas, Lucidity falls into the emerging genre of events known as “transformational festivals,” with other such festivals including Burning Man, Lightning in a Bottle, Symbiosis, Enchanted Forest, Beloved Festival and Harmony Festival.

“These events are changing the landscape of entertainment from observed spectacle to participatory co-created experience,” Haas said.

A big fan of the music offered at the festival, Russell said the musicians who perform are diverse and unique.

This year’s lineup includes the Lucent Dossier Experience, VibeSquaD Live, The Human Experience with Rising Appalachia, Govinda and William and the Earth Harp.

As a part of its mission to lift the community’s spirits, Haas said, Lucidity is committed to giving 15 percent of the net profit from the event back to non-profit organizations.

“We really want people to ask themselves, ‘What does it mean to raise our vibrations and party with a purpose?’” Haas said.

Tickets for the festival are available at the Isla Vista Co-op, Bizerk Costume Shop, the Arlington Theatre and online at lucidityfestival.com/buy-tickets. The festival will return again in spring for the weekend of April 11-13. 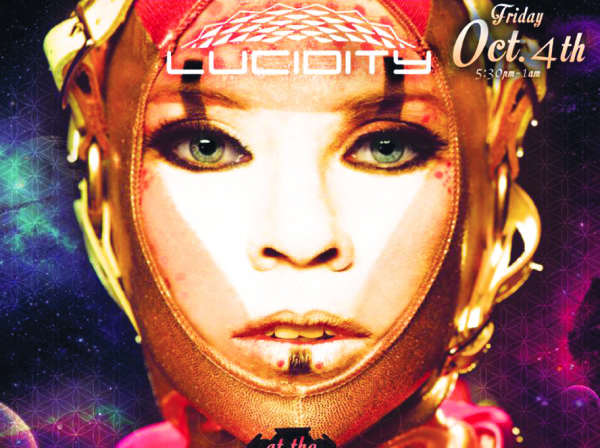