The Daily Nexus
Special Section
First Day of School: Already a Stress Fest?
September 26, 2013 at 5:00 am by Rilla Peng 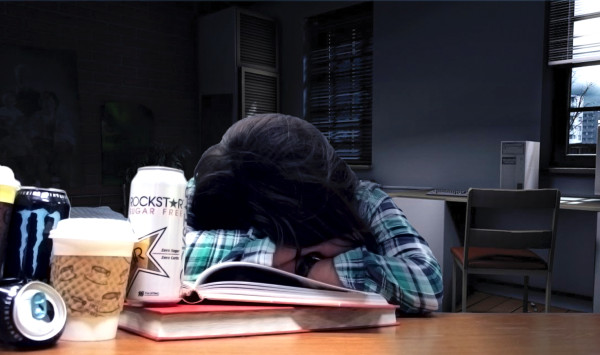 With classes just starting, it can seem like Week of Welcome has just been a barrage of preparatory work and entertaining activities. You couldn’t be stressed out already … Or can you?

The most common adjustment stressors for incoming freshmen and transfer students include homesickness, roommate issues and the fact that UCSB poses a more difficult academic setting than what incoming students might be familiar with, according to Kirsten Olson, Ph.D. and clinical psychologist at the Counseling and Psychological Services (CAPS).
“They might be used to getting all As in high school without working very hard. Then those same study habits don’t work anymore, and they have to work much harder to get the same grades,” Olson said. “It’s similar for transfer students, in that they come from community colleges, and classes here are bigger and much harder.”
But continuing students can also face stressful issues at the start of the new year, and the ones most likely to throw people into a crisis are relationship problems — from break-ups with a long-distance partner or roommate drama, to family concerns or problems with a professor, Olson said.
“Relationship problems are the number one issues people come in to CAPS for, and they often cause the anxiety and depression,” Olson said. “Or, anxiety and depression come first, and that causes the relationship problems. Regardless, relationship problems compound everything.”

The Livin’ Ain’t So Easy: Social Anxiety in the Dorm Life

Two years ago, third-year psychology major Yasmin Irfani moved into her Santa Rosa triple as an out-of-state student from New York. While her living arrangement anxiety only lasted one week, it shocked her.
“It was just so odd living in a room with two strangers you didn’t know at all,” Irfani said. “I was an only child back at home. Here, you don’t know how to be yourself yet and there’s that whole thing about trying to not be awkward, when communicating if it’s cool to talk on the phone a bit or to ask for space for your towel.”
Immediately, the anxiety Irfani felt took a toll on her physical state. “I couldn’t sleep at night for the entire first week because I had been so sheltered in my childhood and I never got to go to sleepovers,” she said. “It was kind of about being on your own, not having family to rely on and wake you up for class in case your alarm didn’t go off.”
Following those first few days of ‘going away to college’ stress, Irfani came across the UCSB Mental Health Peers when the organization was tabling at the Arbor. She found out about a stress management workshop, a 24/7 counseling line offered by CAPS and a multitude of other services.
According to Olson, CAPS offers crisis intervention programs, short-term individual therapy and a wide variety of group therapy and counseling. She said there is also the Mental Health Peer Program — the same resource Irfani utilized — which gives students peer-to-peer counseling. “Oftentimes, people don’t want to talk to a psychologist, but rather to somebody they can relate to, in a different way,” she said.
After talking to Mental Health Peers and a psychologist, Irfani said her worries about dorm life and other living adjustments were lifted.
“After that, the rest of my transition was totally fine because I knew that I had that support. If I ever needed anything, I could do drop-in, schedule an appointment to talk to Mental Health Peers or a psychologist or call the 24-hour line,” Irfani said. “I didn’t feel alone anymore.”

Alcohol and Drugs: A Quick Fix?

Stress That Can Build Toward Depression and Suicide …

According to CAPS statistics, Olson said suicide is the second leading cause of death amongst college students, “We’re doing a lot of campaigning and outreach efforts to let students know about warning signs of suicide, [like] how to be a bystander for intervention and help students recognize the signs, not only in themselves but also in a friend.”
The same statistics, Olson noted, revealed that 50 percent of graduates and undergraduates report feeling depressed and at some point have trouble functioning, and she said social engagement can act as the best solution for these struggles, such as “talking to friend, family member, TA or RA.”
For third-year pre-biology major Nathan Pinckard, his strong connection with his family, friends and faith helped him overcome a severe allergic reaction to a prescription acne drug, Accutane, and the brief sweep of suicidal thoughts that ensued.
“What was hard, emotionally, was that my confidence was destroyed and broken down, and I couldn’t look people in the face anymore. I would avoid the mirror when I was in the bathroom,” Pinckard said. “Psychologically, I had never really contemplated suicide before, but during that time, the thoughts were kind of there. They weren’t at the forefront of my brain, but they were in the background: ‘You could end your suffering now.’”
But Pinckard didn’t.
With strong support from his family and friends, as well as staying connected to his Christian faith, Pinckard said he was able to come out of his depressive episode.
“I was constantly on the phone with my mom and dad during that time,” Pinckard said. “A lot of it was family support and any support system. There was the Intervarsity [Christian Fellowship] community, full of prayers — that’s what got me through it.”
Pinckard said he dispelled stress by taking long walks, reading other people’s similar stories on online forums and listening to Bob Marley, but most of the relief consisted of open communication.
“When you’re stuck in your head and you’re thinking and thinking, you’re not getting rid of stress,” Pinckard said. “What helped was the communication with family and support groups. I then got in contact with my dermatologist again, and she prescribed me two different drugs, both of which really helped me get back on track.”
Stress: the Conquerable Foe
So maybe the first week of school isn’t so stress-free after all. But don’t fret, Gauchos. Stress is conquerable.
Olson urges students to seek out support in any way they find comfortable, whether it is the utilization of a campus service, finding support in family and/or religion or just seeking out a simple conversation with a friend.
“College is about discovering who you are, discovering yourself as a person and having healthy relationships,” Olson said. “We’re here not only to make people successful students, but also to make sure they become successful Gauchos and successful people in general.”
A version of this article appeared on page 5 of the September 26, 2013 print issue.
Print