Offensive graffiti directing a message toward undocumented students that read, “Deportation = Justice; Deport Illegals NOW,” was found on the window of the entrance to Building 406, also known as El Centro, on Sunday.

El Centro is the main meeting place for the student organization UCSB Improving Dreams, Equality, Access, and Success, or UCSB I.D.E.A.S., in addition to other campus groups. I.D.E.A.S. seeks to provide undocumented students on campus with “financial, academic and emotional support” through services such as scholarships and workshops, according to its site.

In response to the incident, Chancellor Henry T. Yang and Vice Chancellor for Student Affairs Michael Young issued a statement to the campus community expressing the administration’s contempt for the discriminatory message and communicating the university’s intent to act as an institution that is “open, inclusive and welcoming to all.”

“We are deeply disturbed by this act of vandalism, particularly in a location that has great historical significance for the development of Chicana and Chicano Studies on our campus, and has long served as an important gathering place for student organizations and a safe space for our students, faculty and staff,” Yang and Young said in the statement.

“This action is not isolated to the undocumented community, nor does it represent the thoughts of a few individuals on this campus,” the I.D.E.A.S. press release stated. “This incident reflects the institutional barriers that our marginalized student communities experience both on and off this campus.”

In regard to such incidents, university administration has pledged to stay committed to eliminating intolerance, while also honoring diversity and promoting a “campus tradition of dialogue and mutual respect,” particularly in lieu of discriminatory acts like the vandalism on El Centro, Yang and Young said in the statement.

“As we continue to investigate and take immediate action to respond to this incident, we would also like to reaffirm that there is no place at UC Santa Barbara for acts of intolerance directed toward any member of our community,” Yang and Young stated.

In light of this incident, I.D.E.A.S. hopes to educate the collective student consciousness concerning bigotry on campus.

“We will hold our UCSB faculty, student representatives and the UC system as a whole accountable to the University of California’s ongoing commitment toward providing a welcoming and safe space to all students,” the I.D.E.A.S. press release stated. 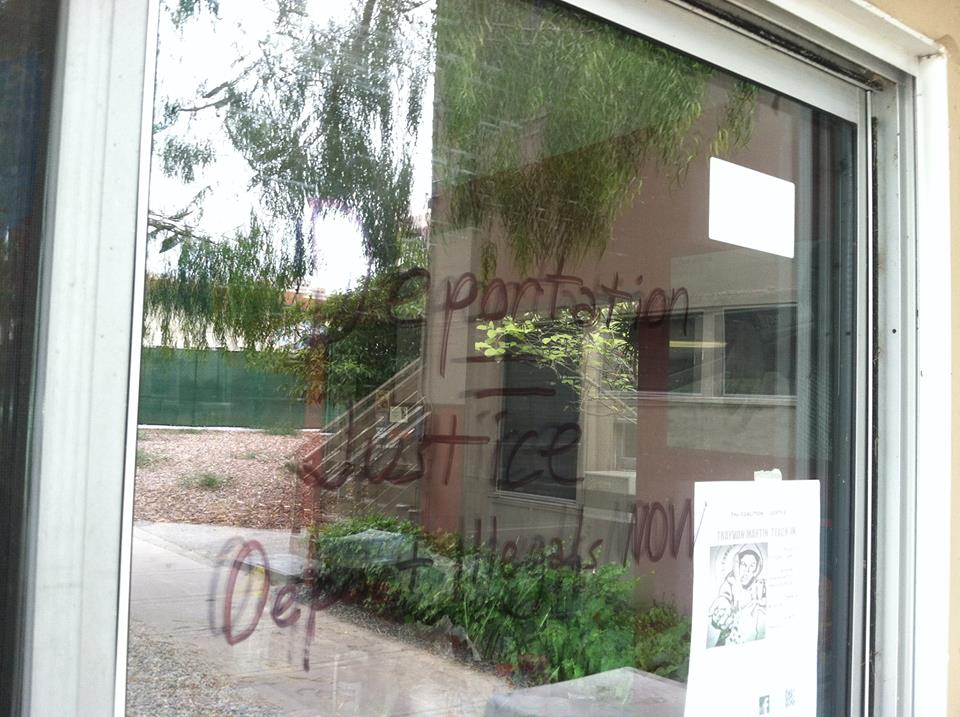 Anti-immigration vandalism was found on Building 406, also known as El Centro. This discriminatory graffiti was found to be especially perturbing considering the historical significance of the building’s location.

I suspect the culprit was themselves a Chicano Studies major attempting to drum up sympathy for their cause. Who else would even know about this building?

“administration’s contempt for the discriminatory message” The message wasn’t discriminatory at all. It simply stated a political opinion. To see ‘discrimination’ where there is none to fall for the PC police’s propaganda rather than doing unbiased reporting. “we would also like to reaffirm that there is no place at UC Santa Barbara for acts of intolerance directed toward any member of our community,” Yang and Young stated.” This is Orwellian nonsense from officials who should no better. While a policy of zero tolerance toward criminal vandalism is appropriate, these officials grossly overreach when they believe they have the right to… Read more »

Yes, campus vandalism is an excellent forum for political discussion, and it’s not like attacking a particular group of people just for being in this country is discrimination by very definition. How dare the school promote tolerance of all students.

Vandalism is a crime. However, given the USCB is quite hostile to free speech (see FIRE on UCSB’s speech codes/record), that it’s chancellor is a totalitarian tool who makes threatening noises about not tolerating ‘intolerance’, given that the UCSB is run covertly by pigheaded PC police, and given that the message was a clean message attacking undocumented free loaders, there’s every reason to tolerate the slogan. How dare the school threaten to use it’s punitive powers to silence what it deems ‘offensive’, ‘intolerant’, ‘hateful’ speech. As any 10 year knows, we live in a free country or at least we… Read more »

Go UCSB IDEAS and El Congreso, much love to all of you and El Centro <3 In solidarity

Students for Justice in Palestine

Love, solidarity, and respect for UCSB IDEAS and every organization using El Centro as a space for their organizing. It is disgusting that members of the Chican@/Latin@ communities are forced to endure such a disgusting display of xenophobic hatred and ignorance.