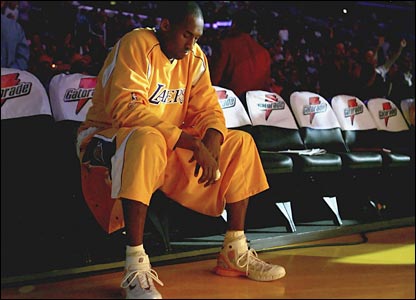 For the past 17 years, the world’s best basketball players have asked the same question. How do you stop Kobe Bryant?

Through countless games, fadeaways, dunks, spin moves, bumps and bruises and defenders beat off the dribble, the one they call “Mamba” has against all logic continued to dominate the world of basketball without even the slightest inclination of slowing down.

Then, pop. The unthinkable happened. The 34 year old maestro, the five-time champion, two-time Olympic gold medalist, the man with the fourth most points in NBA history sat on the floor of the Staples Center holding his foot. You could see a grimace on his face that most Laker fans have learned to ignore.

He did what most of us expected. He came out of the timeout, walked to the free throw line, and he made two free throws to tie the game with just over three minutes remaining. Only this time, he didn’t get back on defense. His eyes were red. It was obvious he was holding back tears. He limped off the court and into the locker room. The result was a torn Achilles tendon.

Kobe Bryant has pushed his body to its physical limits year after year. He has been described as more than just a basketball player, but a warrior, and often regarded as the toughest player in the NBA.

So, how fitting then that the only weakness of the legendary, indestructible warrior Achilles would be the only thing that could stop the greatest warrior of this era.

Suddenly, nothing made sense in Lakerland.

After two depressing years in which the previously top of the world Lakers were run out of the second round of the playoffs, one of the greatest franchises in basketball had seemingly found its way back to the top by acquiring future hall of famer Steve Nash and the most dominant big man in basketball in Dwight Howard.

However, the dream quickly turned into a nightmare. After a 1-4 start to a year that was supposed to be one of the greatest in the team’s glorious history, the Lakers found themselves in disarray.

Fast forward to January. The Lakers are 17-25 and Pau Gasol and Dwight Howard continue to miss games with various injuries. The only constant, as he has been since 1996, is Kobe Bryant.

Then, something changed, and the Lakers started to win. Kobe would go on to have one of his greatest seasons ever, averaging over 27 points a game for the ninth time in his career, tying his career high with 6 assists per game, and shooting the ball more efficiently than he has in years.

Kobe hit the winning shot against the Hawks in a must-win game. Three days later, he brought his team back from down 25 points at New Orleans, a game where his teammates once again failed to play with the fire needed to make the playoffs.

With five games left in the season, Kobe vowed not to come off the court again. If the Lakers won their remaining games, they would clinch a playoff spot, something that seemed unreachable three months earlier.

The Lakers won one game. The next night, they played in the Rose Garden in Portland, an arena they rarely win in. In 48 minutes, Kobe had 47 points, eight rebounds, five assists, four block shots, and three steals, becoming the first player to ever put up a stat line like that.

With three games remaining, the Lakers returned home to play the Golden State Warriors. They trailed for most of the game, but with just minutes left they still had a chance. Kobe nailed a deep jumper to bring the Lakers within three with under five minutes to go.

A minute later, he took a classic “Kobe shot:” a deep, 29-foot, stand-still three to tie the game with a defender in his face. He made it.

The next time he touched the ball, he made his final move, one that after the game he said he’s made “a million times.” He had played every minute of every game for almost three weeks, but on this night, his body gave out on him.

The Lakers would go on to win their remaining games and make it to the playoffs, where they were swept by the much superior San Antonio Spurs.

Kobe underwent successful surgery to repair his achilles, and was originally diagnosed as out six to nine months. Many players never come back from this injury, and those that do have found it very difficult to perform at a high level.

If there’s anyone that can do it, though, it’s Kobe Bryant. While the numbers of his dwindling number of peers who played in the ‘90s, such as Kevin Garnett, Tim Duncan and Steve Nash, have fallen steadily, Kobe has somehow kept his production consistent.

If there’s anything his teary-eyed interview which directly followed his injury tells us, it’s how much he cares. The undeniable, unbreakable emotion is still there. The fire, will and inhuman competitive spirit is still there.

Every doubter that he’s ever had, he’s silenced. He’s stepped up to every challenge he’s been faced with since joining the league at the age of 17. In 2003, someone said that his daughter was a better shooter than Kobe. The Mamba answered that by breaking the NBA record with 12 three-pointers in a single game, a record that still stands today.

That’s just who he is. He won’t stop fighting because he doesn’t know how. He already has a head-start on the recovery process by studying from the fastest recoveries from this dreaded injury and promising to “do it better.” He’s shooting for a return to the court by the end of October, the start of what just might be his final season.

He will prove the doubters wrong again. He will come back not as a shell of his former self, but as formidable a force as he has ever been. He will continue to be Kobe Bryant.

This article is an online exclusive and did not appear in the print edition of the Daily Nexus.

To think that you only had one hour to write this, I enjoyed reading your article more than I enjoyed the articles of most pro writers I read. You are already a PRO brother! Keep it up!

Kobe is a legend and inspiration to many in the game. I hope he has a fast and successful recovery.