The Daily Nexus
News
TMP Fair Funds Medical Research Startup
May 23, 2013 at 5:00 am by Yishian Yao 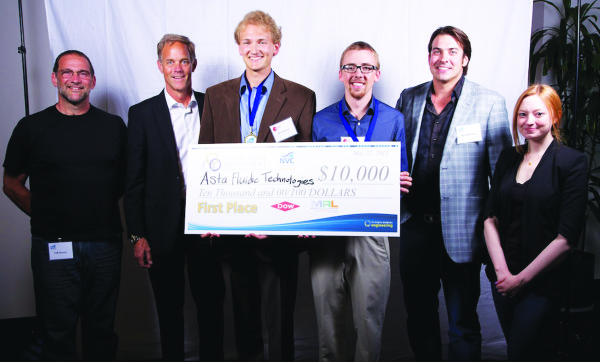 The competition started with 55 teams in October 2012 and narrowed down to 20 during the New Venture Competition Semi-Finals last month. The top six — Asta Fluidic Technologies, Gain Changer, Komodo Interactive, MyConciergeMobile, Napses and Polyspectra — were selected by attendees of the fair and gave their final pitch yesterday at Corwin Pavilion.

According to TMP program manager Mike Panesis, NVC has grown in the last few years due to the recent economic downturn that has prompted students into taking advantage of the unique resources provided by TMP mentors.

“These days, you can’t really count on employers … there also is a lot more interest in entrepreneurship, in general, because people like to have control of their own destiny,” Panesis said. “We want to be known for graduating start-ups and companies along with students.”

Last year, the competition had a system in which two separate tracks teams could enter — market pull or technology push — which allowed for two first-place winners. This year however, the two tracks merged and instead of three teams challenging each other for first place in respective categories, all six finalists vied for one victory.

According to Danny Iland, computer science Ph.D. student and member of fitness measuring tool business Gain Changer, the competition’s guided blend of technology and science with the business market has been an eye-opening experience for competitors.

“It’s been a great process, mostly because the combination of the amount of learning and development was great,” Iland said. “The experience in the contest gives you a good sense of the business side of technology.”

Now that the competition is over, Iland said he and the Gain Changer team want to take the skills they gained in NVC to bring to their venture in the real world business market.

“I want to move it forward as a viable business,” Iland said. “Now is the time to bring a product like ours to market, especially with products like Fitbit and Nike+ showing the demand for fitness tracking.”

According to Panesis, after years of NVC experience, he has learned students should enter the competition several years in a row if they want solid experience and a chance at winning.

“Something very important that we’ve learned this year is that it is very beneficial if you have multiple years in the New Venture Competition,” Panesis said. “That accumulation of learning prepares you much better to be an entrepreneur when you graduate, and people tend to place better and better every year.”

The TMP program’s NVC competition is the longest running such program in the country, with several previous winners going on to successfully launch their ventures post-graduation. One of the earliest winners from 2001, Inogen, has brought their portable oxygen concentrator to national acclaim, and last years’ winner, aPeel Technology, won a grant from the Bill & Melinda Gates Foundation to conduct further work on their food preservation product.

A version of this article appeared on page 3 of May 23rd’s print edition of the Daily Nexus.