With the conclusion of the 2012-13 season, the UCSB women’s water polo team will graduate four seniors from its program. Defender Kacey Creek, attacker Shelby Haroldson, utility Rachel Nelson and All-American goalkeeper Ruth Milne will depart but pass on the mantle to the squad’s rising youth and 11 decorated recruits for the 2013-14 season.

The entirety of the class hails from California and is composed of five attackers, two defenders, three utilities and one goalkeeper.

Nikki Quinn, a goalkeeper, plays for Los Alamitos High School and is an honoree for the 2012 USA Water Polo Junior Olympics All-American Second Team. With the departure of Milne, UCSB’s all time saves-leader, Quinn will look to help Santa Barbara address the void at the position.

With the addition of this incoming recruiting class, UCSB looks to be in prime position to continue its recent success heading into next season. 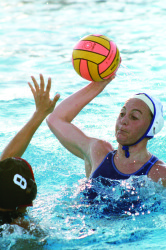 A version of this article appeared on page 8 of May 21, 2013’s print edition of The Daily Nexus.