Despite losing only three seniors from last year’s team, the UCSB women’s soccer team will welcome 14 new players for its 2013 recruiting class. Following a season where the team struggled putting the ball in the back of the net, the Gauchos add depth to their squad with versatile players at each position, primarily forward.

“Part of the reason we have such a big recruiting class is because we felt we had to make some changes,” Head Coach Paul Stumpf said. “There are a couple young ladies [coming in] that do score a pretty good number of goals for their high school teams and for their club team.”

Headlining the class is a pair of teammates from San Ramon Valley High School, forward Morgan Idso and forward/defender Makenna Kummer. The two bring athleticism up top for the Gauchos and provide big targets inside the box with their size. In their senior year, the two combined for 10 goals and led their team to the CIF North Coast Section Tournament.

“They’re really good ball strikers. Morgan specifically has one of these knacks; when she shoots, it’s going on frame hard,” Stumpf said. “Makenna is going to be a more wide-striker type that’s going to deliver the balls.”

Along with Idso and Kummer, forward/midfield Ashley Dean from Yucaipa High School and center midfielder McKinsey Martinez from Rancho Cucamonga High School have the potential to start right away as strikers for the Gauchos in the upcoming season.

Dean gives UCSB a left-footed threat capable of scoring and is able to play multiple positions, most notably as an outside back that gets forward. Martinez, although undersized, provides another aerial threat for the Gauchos. Besides the ability to shoot, her playmaking abilities in the midfield makes another versatile player on the field, as she finished her senior season with six assists.

“We had trouble scoring goals and these are all forwards we really feel they’re going to come in and challenge for starting spots right away,” Stumpf said. “If not that, they’re going to be the first ones coming off the bench.”

Although three starters from the backline will be returning this season, the Gauchos will benefit from the arrival of Coto de Caza native Kailey Hackett from Santa Margarita Catholic High School. The central defender/sweeper also has the chance for competing for a starting position right away because of her defensive prowess on the pitch. As a senior she won a pair of titles and was selected as First Team All-CIF.

Last year, the Gauchos only managed to score more than one goal twice in nine conference games. However, with the added size and talent coming from the recruiting class, UCSB will be more potent offensively in the upcoming season.

“I think the size and I think the quality is two things that make this group standout,” Stumpf said. “We’re going to be a very different team next year.” 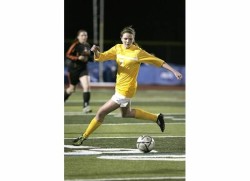 A version of this article appeared on page 8 of May 16, 2013’s print edition of The Daily Nexus.