The Daily Nexus
News
City Council Meeting Revisits Gang Injuction
May 15, 2013 at 5:00 am by Marissa Wenzke

For the first time since its initial proposal in 2011, the outline for a Santa Barbara gang injunction was listed on the agenda of a Santa Barbara City Council meeting yesterday evening, allowing community members to finally voice their concerns over the largely controversial issue.

First proposed in 2011, the injunction lists 30 documented gang members who will not be permitted to enter specified safe zones with other individuals without being charged with “contempt of court.” However, the injunction holds language that also includes 300 other individuals, who are not explicitly identified, thus drawing much criticism from local residents and community organizations over allegations of racial profiling and other infringements of civil rights. At yesterday’s City Council meeting, which began at 6 p.m., local organizations protested outside City Hall and community members flooded the meeting room, as roughly 40 to 50 concerned community members spoke about the issue during public comment.

Currently, the Santa Barbara City Attorney has filed a civil complaint — in collaboration with the SB County District Attorney, SB Police Department and City of Santa Barbara — calling for the injunction. Santa Barbara Superior Court Judge Colleen Sterne will decide whether or not to implement the drafted injunction, which is essentially a court-issued restraining order against 30 specified individuals.

Local nonprofit organization Palabra, who helped provide the case defendants with legal counseling, spoke at the meeting’s public comment protesting the injunction while local grassroots organization Poder, or People Organizing for Defensive and Equal Rights, rallied outside Santa Barbara City Hall in protest of the proposal.

At the rally, Francisco Chavo Romero, an organizer with Union del Barrio and Colectivo Todo Poder al Pueblo in Oxnard, said the injunction’s inclusion of 300 unspecified individuals makes it capable of unfairly targeting minors who are not already being served with an injunction.

“This means that there is a secret list of individuals that will be served later — including minors,” Romero said. “They usually are, as was the case with most injunctions … In other words, these youth are going to be criminalized, targeted.”

Romero referenced a gang injunction implemented in Oxnard, where youth as young as eight years old at the time of the general injunction were being served with personal court-issued injunctions in their late teens.

The injunction would apply to all of Santa Barbara’s Eastside and Westside, certain parks and Cabrillo Street during large events, such as the annual Fiesta festival, according to Cindy Gonzalez, spokesperson for Poder. However, Gonzalez pointed to the potential use of racial profiling as most alarming.

“The gang injunction is just an ordinance that is being put in place to racially profile our youth. It affects the youth, people of color,” Gonzalez said. “Its effects will be pushing out the community out of their own community … They’re not solving the gang problem. If they do think we have a gang problem, they are only pushing the problem out.”

However, Santa Barbara City Attorney Stephen P. Wiley opened last night’s discussion with adamant assertions that such targeting would not occur, saying there would be no potential for racial profiling or including minors.

In tracing the history of the injunction, Wiley said the City Attorney’s Office initially sent an 11-page memo to the City Council back in July 2008, which outlined the pros and cons of an injunction. However, both the City Attorney and the Santa Barbara Police Department did not see the need for such an injunction at that time, and a proposal for one was not made until 2011, Wiley said.

City Councilmember and Mayor Pro Tempore Randy Rowse later asked Santa Barbara Police Chief Cam Sanchez why SBPD decided to request the injunction three years after saying it was not necessary. Sanchez said growing gang activity has created the need for an additional “tool” to deal with active gang members, who he emphasized would be the only individuals impacted by the injunction.

“Over the years, I believe that we’ve got to the point that we need a tool to deal with the most active, and not profile any other young person and judge them for how they’re dressed,” Sanchez said. “This is about criminal behavior … not how you’re dressed, or how short or long your hair is, or what side of State Street you live on.”

When Rowse raised concerns over the injunction’s potential to generalize a whole “class of people” or “broader population”, Sanchez responded by saying local police officials are well-trained and held to a standard of professionalism that would not allow for such generalizing or profiling.

However, City Councilmember Cathy Murillo questioned Wiley on other grievances with the injunction, namely its potential to prohibit defendants from performing routine activities like walking their children to school. She asked Wiley if the City Council could discuss and adjust the language of the civil complaint to allow for such exceptions.

“Isn’t it right that just as it took two council members to bring this to open session, that two of us can put it into a closed session to talk about the language you’re going to use in your draft order?”

In response, Wiley simply stated that such a session would not be necessary.

“No, I wouldn’t think so,” Wiley said. “The City Charter designates me as the City Attorney, and it just really would not be workable or appropriate to have the seven council members, in closed session, do legal work.”

After Murillo briefly attempted to push the issue — a move which drew applause from the majority of the audience — Mayor Helene Schneider put a halt to Murillo’s comments, reminding her to only ask questions. With this, Murillo concluded her comments. 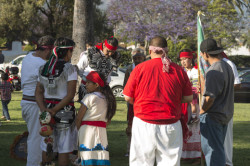 Members of the local grassroots organization P.O.D.E.R. rally outside the Santa Barbara City Hall in protest of a proposed gang injunction yesterday. The injunction has been criticized as an example of racial profiling.

A version of this article appeared on page 1 of the May 15th, 2013’s print edition of the Nexus