The Daily Nexus
Water Polo
Samantha Murphy Garners Big West Freshman of the Year
May 10, 2013 at 4:24 am by Roy Kim

After scoring a record 78 goals for the No. 17 UCSB women’s water polo team this season, freshman utility Samantha Murphy became the first Gaucho to be crowned the Big West Freshman of the Year in her sport. The award caps a year in which Santa Barbara compiled a 20-15 overall record and placed sixth in the Big West Tournament.

Murphy’s total goals ranked third in the Big West in 2013 and put her in the conference’s top 10 single-season records list.

“Getting this award was a really big honor,” Murphy said. “I believe it brings a lot of positive attention to the program and Cathy Neushul as a new head coach.”

In the context of some of Murphy’s achievements, winning the award may be little surprise to those who have followed her water polo career. A high school standout, Murphy earned league MVP accolades after leading her team to its first CCS Championship title and was named a 2011 NISCA First Team All-American.

In her first year at UCSB, Murphy produced the team’s highest goal output while collecting the second most assists.

“I knew with her work ethic, her intelligence, her student-of-the-game [mentality], that she would be very productive for us,” Head Coach Cathy Neushul said. “[But] I had no idea it would be this productive.”

While having played water polo originally as a recreational sport, Murphy found the drive to take on collegiate water polo after being encouraged by her high school coach and teammates.

“My high school coach pushed me to play D-1,” Murphy said. “Another one of my teammates older than me went to go play D-1, so that really gave me the motivation to try as well.”

Murphy played a pivotal role in the team’s upset win over then No. 6 San Diego State on Senior Day, racking up three goals in the 8-5 win. In the Big West Tournament, she led the Gauchos with seven goals and helped propel Santa Barbara past No. 18 UC Davis by scoring four goals in the come-from-behind 10-9 victory.

“We knew she had talent; the question was how it would integrate into more physical play in a college game,” Neushul said. “She’s certainly lived up to that bill, there’s no doubt about that.”

Murphy credits her teammates and Neushul for putting her in a position to pick up the honor.

“I really have to give it to my coach and my teammates who made this award possible,” Murphy said. “Cathy Neushul is a really good coach, and coming into my first year of collegiate water polo is very, very different from high school — she made it so that I could learn quickly and transition as fast as possible.”

Although the women’s water polo season has just concluded, the Gauchos can look forward to playing next year with higher expectations.

“She’s adapted very well to the physical side of the game and far exceeded our expectations,” Neushul said. “I think the future of UCSB water polo is really bright.” 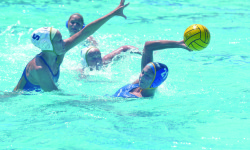