The Daily Nexus
Artsweek
Alpha Phunk Talks Writing, Friendship and Jazz
May 9, 2013 at 2:00 am by Andrew Crockett and Tina Petrosian 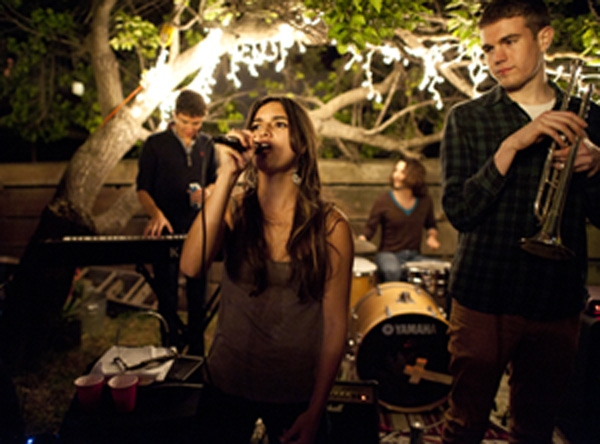 A French drummer and an American guitarist walk into a bar — a coffee bar that is — and sit down to discuss their band, Alpha Phunk. After playing together for less than a year, the group has clinched a spot on the Extravaganza lineup and made a considerable amount of noise performing in Isla Vista.

Winning the UCSB Battle of the Bands in February earned Alpha Phunk a spot on this year’s Extravaganza lineup. They will open the concert with a 30-minute set.

“It’s awesome that we won Battle of the Bands,” Loris said. “It’s honestly the best thing that’s happened all year.”

Alpha Phunk’s set will contain only original songs — no covers — according to Pearse. The band has been constantly practicing and rehearsing to prepare for the show.

“We’re writing new material, working on arrangements for some old material,” Wrenn said of the preparation.

A seven-member band made up of a few big personalities can provide many distractions during practice and conflicts with scheduling. In spite of these challenges, the band thrives, finding strength in numbers.

“It’s great because you get a much fuller sound when you have all the different instruments,” Melo said.

“We don’t play pure jazz,” Loris said. “As soon as somebody does something a little bit different or something rhythmically off they’re getting called jazz, which is fine. Jazz is a great influence on us. I wouldn’t say we play jazz.”

Wrenn adds, “Everything is jazz.”

The band members are a tight-knit bunch. Before all of their shows, they make dinner together and spend time with each other. “Each one of us brings something unique to the table,” Bennett said. “That’s what drives our respect for each other: just knowing that without one of us, it wouldn’t be the same.”

Pearse, an Education Abroad Program student from England, appreciates the opportunity to continue playing music in the U.S. “When I came here, I was looking to keep up playing some music,” Pearse said. “I didn’t want to lose it or stop having a perfect time playing music.”

Loris is eager to praise Pearse’s musical contribution to Alpha Phunk. “Ben is great at arranging,” Loris said. “He’s great at making it sound appealing to everybody. That’s really important.”

Crowd interaction is important to the band during live shows.

“If everyone was just standing there and staring at us, it’d be kind of weird,” Bennett said. “I like when people respond physically.”

“What I love is when I see people making out,” Loris added. “It means our music is sexy.”

The band considers Beresford, Hall and Melo the “faces” of their band because of their visibility with the crowd.

Beresford may be the band’s quietest member, but his fellow band members are quick to speak up and compliment his musical abilities. “He’s not quiet when he plays trumpet!” Pearse said. “Bobby’s the one with all the cheers at the shows. When he plays, everyone goes nuts.”

“I know him much better through his playing than his words,” Wrenn said. “He’s got a fantastic ear for harmony and a great sense of melody, melodic development … He’s never trying to display his talent to the world: he’s just playing music and expressing himself.”

Hall and Melo write all their own lyrics, just like the rest of the band contributes to writing for each of their instruments. “Everybody writes,” Loris said. “The idea is initiated by one of us, but each of us writes their own part.”

Yet, the band communicates with each other to make sure everything is cohesive. “We try to collaborate as much as we can,” Hall said. “We have writing sessions to make sure that the songs we write collide together, that they’re not random.”

Hall, who has always been a fan of hip hop, was especially impressed by the lyricism of French hip hop after spending the last year studying abroad in France.

Yet the content of Hall’s lyrics is not always so serious. “Other times, if it’s just a fun tune I just freestyle it a little bit,” Hall said.

For Melo, the lyrics are personal. “The lyrics are my way of venting,” Melo said. “That’s how I deal with things — I write them into songs. It’s pretty much like a diary for me.”

Wrenn, a music major at UCSB, dedicates a considerable amount of his time to music between classes and playing with Alpha Phunk. He appreciates that his band members share his commitment to creating unique music.

“With a lot of bands — I don’t mean just I.V. bands — the music fits a model, a mold,” Wrenn said. “The stuff that we bring to the table wouldn’t be realized without Sofia, Laurence and Bobby.”

Loris credits the UCSB Jazz Ensemble, directed by Dr. Jon Nathan, as an important foundation for the band, as well as his own college experience. Five out of seven band members are part of the Jazz Ensemble: Bennett, Beresford, Loris, Pearse and Wrenn.

“I think the cool thing about us being in the jazz band is that we — the instrumental people — are all very good at communicating just by looking at each other,” Bennett said. “We’re all trained to do that. So if someone wants to solo or take another chorus … we can all communicate.”

Although Bennett joined the jazz program because of the lack of guitar programs, he is grateful for the experience. “I joined the UCSB Jazz Band and that’s how I met my best friends. I’m thankful for this program,” Bennett said. “It’s been the rock in my college experience – something stable.”

One of the band’s favorite shows was a spontaneously planned one. After missing Alpha Phunk’s show on April 19, Speak Volumes Media members invited the band to play at their house the following day. The band agreed.

“We literally played a show that was not planned more than 24 hours the day before and we still had the parking lot almost full,” Loris said.

Be sure to check out Alpha Phunk’s performance today at noon on Jonny Lipshin’s KCSB show (91.9 FM). The band will be performing their whole set during the show.

The band will also be performing Friday night at the Speak Volumes Presents: Launch 2013 event on 6521 Sabado Tarde in I.V. Live performances are set to start at 8 p.m. and Alpha Phunk will come on around 11 p.m.

And of course, don’t miss them at Extravaganza on May 19 at Harder Stadium.

For more information on Alpha Phunk, look them up on Facebook at http://www.facebook.com/alpha.phunk.ca.

A version of this article appeared on page 12 of the May 9th, 2013’s print edition of the Nexus