The Daily Nexus
News
Balcony Collapse Victim Sues Property Manager
May 7, 2013 at 5:00 am by Patrick Kulp 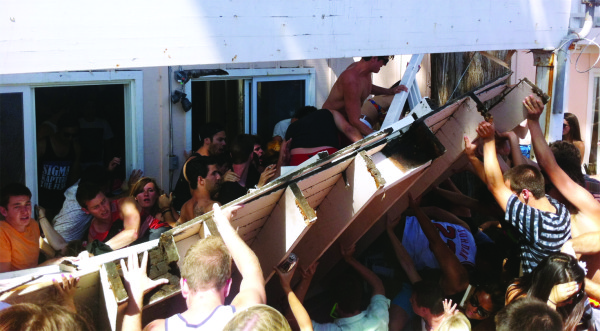 A UCSB student who suffered a fractured pelvis when a balcony collapsed on her during a Deltopia house party has filed a lawsuit against the manager and owner of the property, citing allegations of negligence and premises liability.

The complaint was filed on April 24 in the Santa Barbara County Superior Court  on behalf of fourth-year Stephanie Grace and directed towards property manager Ronald Wolfe & Associates, Inc. and the Elliott Family Trust, which owns the 6643 Del Playa Drive property. According to the suit, the defendants’ failure to maintain the premises resulted in long-term problems with termites and wood rot that caused the balcony to deteriorate.

Grace, who was on the ground-level patio when she was struck and pinned down by the falling balcony, was among four people officially reported as seriously injured in the incident. Grace said she is unable to comment on the lawsuit or the incident without her attorney present.

Grace’s attorney Robert Clayton, a partner at Los Angeles-based law firm Taylor & Ring LLP, said he was also retained by another victim who suffered multiple tibia fractures. According to Clayton, the second case will be filed as a separate complaint, but ultimately consolidated with the initial lawsuit for trial purposes.

Clayton said while he is not aware of any other lawsuits filed in response to the incident at this time, he expects that other victims will most likely seek out legal counsel due to the severity of many of the injuries.

“I have understood that there was one student who had a fractured femur, another who had a torn ACL — there were students with multiple different types of fractures from ankles to feet to leg — just a variety of other things,” Clayton said. “So, to my knowledge ours is the first, but if I were a betting man, I would bet that there are other lawsuits to follow.”

According to Clayton, because the property managers were notified of the termite infestation and dilapidated condition of the balcony and neglected to address it, it was only a matter of time before the balcony caved in.

“Essentially the thrust of the allegations are that there is long-standing wood rot and termite damage to the balcony that the owners were aware of and they failed to remedy so this was not a question of if this balcony was going to collapse — it was when it was going to collapse,” Clayton said. “And unfortunately, it occurred during a big college event — Deltopia — and unfortunately, many students were injured as a result.”

However, Ronald Wolfe said while he cannot comment on the specific allegations until the suit is served, the collapse of the balcony had to do with the extreme duress it was under from the number of people on it. According to the Santa Barbara County Fire Department, there were around 20 people standing on the balcony when it collapsed.

“At this point we can say that there appear to be a number of unsupported allegations of misconduct on behalf of the owner and management. What we do know at this point is that the over-crowding of the deck and the misuse of the premises appears to be cause of the damage to the deck and injuries to those present,” Wolfe said in an email.

A.S. Legal Resource Center attorney Robin Unander said there are always many complexities to consider in these types of liability cases, and it could be the case that multiple parties are liable for the incident.

“Liability here is a nightmare. The injuries are the most straightforward part of this whole thing.  The liability is not so straightforward,” Unander said in an email. “Multiple claims likely need to be made and pursued as the insurance companies assess liability, and point fingers of blame everywhere else but at their insured. This is not an easy slam dunk case for the injured people because no one is going to happily accept liability, and it may be apportioned between parties.”

A version of this article appeared on page 1 of the May 7th, 2013′s print edition of the Nexus.