The Daily Nexus
News
Flying Lanterns Light Up Camino Pescadero Park During Alpha Kappa Psi’s Fundraiser
May 3, 2013 at 5:00 am by Daily Nexus Staff

Yesterday night the brothers of the Alpha Eta Pledge Class of Alpha Kappa Psi held a Flying Lantern fundraiser in Camino Pescadero Park. The event began at 9 p.m., and although the official release time for the lanterns was at 10 p.m., supporters could release their lanterns into the sky at any time.

The paper lanterns, which cost $7 each, were sold in Isla Vista and on campus at the Arbor, and the event raised money for the fraternity’s pledge class. 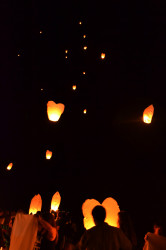