After last year’s draft featured three or four franchise-changing quarterbacks, the top of the 2013 draft was quite the opposite. Instead of a selecting big time playmakers, the Chiefs and Jaguars selected offensive tackles Eric Fisher and Luke Joeckel with the first two overall picks.

All of that was semi-expected. What was not foreseen was the Bills selection of Florida St. quarterback E.J. Manuel with the 16th overall pick. Many experts had West Virginia’s Geno Smith as the top rated quarterback, but the Bills and first year Head Coach Doug Marrone decided to go with Manuel. Marrone is coming to the Bills via Syracuse, where Ryan Nassib was his quarterback. There was a lot of speculation that the Bills would select Nassib and keep him with his college coach. However, the Bills ultimately decided to trade down from their original spot at number eight overall to 16th overall and select Manuel.

Those were some of the top story lines from the first round; here is a look at some of the draft classes for individual teams.

The 49ers did not have any glaring needs heading into the draft. During the offseason, defensive tackle Isaac Sopoaga signed with the Eagles and safety Dashon Goldson signed with the Buccaneers. However, before the draft, the Niners added depth at those positions by signing safety Craig Dahl and former fifth overall pick and defensive tackle Glenn Dorsey. These replacements aren’t on the same level but they are certainly capable players.

With their first three picks in the draft, the Niners went with safety Matt Elam, defensive end Cornellius “Tank” Carradine, and tight end Vance McDonald. Elam is coming out of the University of Florida where he proved he can impact the game with his coverage and tackling skills. McDonald fills the void left by back up tight end Delanie Walker’s departure. In the fourth round, the Niners selected South Carolina running back Marcus Lattimore. Lattimore was a perennial preseason Heisman candidate before tearing his ACL and dislocating his knee cap in consecutive seasons.

The Chargers are in an awkward place as a team right now. Five or six years ago, the Chargers were one of the most talented teams in the league. Now it seems as though the rest of the league has gotten better, while the Chargers have let their roster wither. Now with a new general manager in Tom Telesco and first year Head Coach Mike McCoy at the reins, the Chargers are headed in the right direction.

Entering the draft, the Chargers had obvious needs on the offensive line and at the wide receiver position. With their first three picks, San Diego took Alabama offensive tackle D.J. Fluker, Notre Dame linebacker Manti Te’o and Cal wide receiver Keenan Allen. The Chargers really nailed it with these picks. Fluker will start right away and will probably develop into a solid left tackle. Te’o was a projected first rounder but fell all the way to the Chargers at 38th overall. Look for all three of these picks to contribute right away in the NFL.

The Packers need to protect Aaron Rodgers, develop a better running game and shore up their aging defense. So what did they do? Drafted a beast of a defensive end from UCLA in Datone Jones, selected two offensive linemen and locked up two of the best running backs in the draft with Alabama’s Eddie Lacy and UCLA’s Johnathan Franklin. With these players and their other draft selections, the Packers did a beautiful job at filling the team’s needs. However, Green Bay does need to find an answer to the departures of defensive back Charles Woodson and wide receiver Greg Jennings.

The Vikings made the most out of their three first round picks. The Vikings needed help on defense and at the wide receiver position after the departure of wide receiver Percy Harvin. At 23rd overall, they drafted an absolute stud in defensive tackle Sharrif Floyd, who many projected to be a top-10 selection. Then they grabbed cornerback Xavier Rhodes out of Florida St. Rhodes is a physical player, who also possesses good ball skills. At 29th overall, Minnesota filled Harvin’s spot with Tennessee wide receiver Cordarrelle Patterson. Patterson is 6’2”, 216 pounds and can jump out of stadium; however, he did only play one year of big time college football after transferring from the junior college ranks. Nonetheless, the Vikings are a much better team now with Patterson lining up with new acquisition Greg Jennings.

After a few years of controversy and rumors, the Eagles finally parted ways with Head Coach Andy Reid after fourteen seasons. Now the man calling the shots is former Oregon Head Coach Chip Kelly. Kelly is thought of around football as an offensive genius who is going to try to bring his patented style of lightning quick offense to the NFL.

With the fourth overall pick, the Eagles went with Oklahoma offensive tackle Lane Johnson. Johnson makes sense because he played in a similar quick tempo offense in college. Johnson is a freak athlete who converted to tackle after playing quarterback in high school. Philadelphia then went on to take Stanford tight end Zach Ertz who can do a lot of things on the offensive side of the ball. He is a tough, versatile athlete who will fit into Kelly’s offense nicely.

With the first pick in the fourth round, the Eagles shocked a lot of people by drafting USC quarterback Matt Barkley. Barkley’s stock plummeted in his final year of college after he would have likely been a top-10 pick in the 2012 draft. Barkley’s arrival brings a lot of attention to the QB situation in Philadelphia. Is Michael Vick the right fit for Kelly’s spread offense? Or it could be either Nick Foles or Barkley, who are more pocket passers.

The first five teams that I mentioned all had great drafts. The Oakland Raiders, unfortunately, did not. While the Raiders’ woeful roster management should come as no surprise, they just continue to baffle me.

The Raiders ended up taking D.J. Hayden, a cornerback out of Houston, with the 12th overall pick. Hayden is a great story because he almost lost his life in college after a knee to the chest caused immense internal bleeding. But if you are the Raiders and you want to take a cornerback, how about just staying at the third overall pick and select Alabama’s Dee Milliner? Milliner is a player you can build your defense around, but instead the Raiders traded down to gamble on a player who may never play a down of professional football.

So, with the 2013 NFL draft in the books we can all look forward to the Ravens-Broncos game on opening night, another New York Jets quarterback controversy and another year of Tony Romo playing quarterback for the Cowboys. 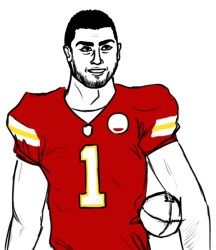 A version of this article appeared on page 6 of April 30, 2013’s print edition of The Daily Nexus.

Art by Anna Xu of The Daily Nexus

FYI – the 49ers selected ERIC REID – S – LSU with their first round pick; the Ravens selected Matt Elam later in the first round.