The Daily Nexus
Science & Tech
Scientists Determine Cause of LED Efficiency Droop
April 29, 2013 at 5:00 am by Daniel Saleh

A collaborative effort between materials researchers at UC Santa Barbara and at CNRS-École Polytechnique in France has determined that Auger recombination is the cause of the efficiency drop that light emitting diodes (LEDs) experience at high drive currents.

LED “droop,” as it has been called, is a phenomenon with no clear cause that has held back LEDs as a replacement technology for incandescent bulbs. The “droop” is a strange decrease in light production at higher currents, which is a major flaw that has prevented LEDs from being used in commercial or residential lighting.

LEDs are grown like crystals and are expensive at larger sizes due to the greater surface area. Subjecting smaller LEDs to higher currents to produce the same amount of light has been the solution, but the “droop” in efficiency has limited the use of LEDs as widespread lighting.

The experiment began in 2011, when UCSB materials science professor Chris Van de Walle and his colleagues theorized that a process called Auger recombination is behind the loss of efficiency in gallium nitride-based LEDs. Auger recombination occurs when electrons expend their energy via heat loss through collisions with other electrons instead of through light emission. Along with their research team, UCSB materials science professors Claude Weisbuch and James Speck conceived, planned and conducted an experiment and found definite evidence of Auger recombination through the energetic signature of electrons emitted from the LEDs.

UCSB graduate student researcher Justin Iveland noted that the breakthrough was not a “silver bullet” for LED droop but was an important step on the road to finding a workaround for the efficiency drop.

“It is just a specially prepared surface wherein we are measuring the energy of electrons leaving the surface,” Iveland said.

According to Iveland, the new method of detection that the experiment yielded is another tool scientists can apply to their LED research. The team plans to see if Auger recombination also occurs in other types of LEDs besides gallium nitride LEDs.

Researchers from École Polytechnique near Paris, affiliated with the Centre National de la Recherche Scientifique, worked closely with UCSB scientists on this experiment with the backing of the French government. 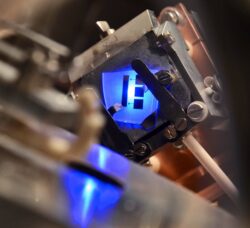 Simultaneous electron emission energy occurs when a LED light is under a ultra-high vacuum chamber.

A version of this article appeared on page 5 of the Tuesday, April 30th, 2013 print edition of the Nexus.