The Daily Nexus
Sports
Gauchos Take Two of Three Against UC Riverside
April 29, 2013 at 4:28 am by Caleb Shoffner

The UCSB baseball team could not complete a weekend sweep for the second week in a row. The Gauchos defeated UC Riverside Friday and Saturday to take the series win but were unable to come away with all three games, losing 8-5 on Sunday.

Taking two out of three brings the Gauchos to a 23-19 overall record and 8-7 in the Big West. Riverside, on the other hand, moves to 18-21 and a 7-8 Big West record. Cal State Fullerton remains on top of the conference at 11-3.

On Friday, UCSB came away with a victory in a high scoring affair. The Gauchos got things started in the top of the first, scoring four runs on six hits in the inning. Junior outfielder Joey Epperson led the game off with a double. After a sacrifice bunt moved him to third, sophomore second baseman Woody Woodward drove him in for the game’s first run.

Freshman designated hitter Robby Nesovic followed with a double to bring home Woodward to record his first RBI of the night. Nesovic would finish with three hits, three runs and three RBI.

The Highlanders came back with two runs in the home half of the first as well as three more in the second to take the lead through two. Sophomore starting pitcher Austin Pettibone allowed five runs, two earned, through seven innings of work to improve to 6-2 on the year.

Down 5-4, UCSB scored three in the third to retake the lead and another three in the sixth for good measure. Riverside was able to plate two runs in the bottom of the ninth but freshman closer Dylan Hecht would come on and close out the game for his fifth save of the year.

On Saturday night runs were at a premium as the Gauchos would go on to win 2-0. Freshman starting pitcher Justin Jacome was lights out as he allowed just two hits and two walks through seven and two-thirds innings.

“Jacome really threw the ball well,” Checketts said. “He threw a lot of strikes and had really good fastball command. He did a really nice job.”

Junior pitcher Ben Doucette was the tough luck loser in that one as he threw seven innings and allowed just one unearned run in the sixth inning for Riverside. The Gauchos would tack on another run on an Epperson single in the eighth before Hecht came on to collect his second save of the weekend.

In Sunday’s finale, Riverside was able to put up five runs in the first inning to take a commanding lead early. Junior starting pitcher Cameron Cuneo allowed five unearned runs through two and two-thirds innings before being relieved by Nesovic in the third.

Santa Barbara was able to get one across in the second inning and came to within one after a three-run home run by sophomore Tyler Kuresa in the fifth.

Nesovic was unable to keep the Highlanders at bay, however, as he allowed three runs in the eighth. In the final at bats for UCSB, Kuresa added an RBI double in the ninth to attempt a comeback but the Gauchos would ultimately fall 8-5.

Coming up for the Gauchos will be a home series against UC Irvine on Friday, Saturday and Sunday. 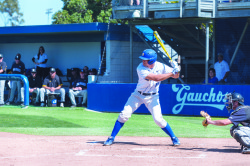 A version of this article appeared on page 6 of April 29, 2013’s print edition of The Daily Nexus.