The UCSB men’s tennis team capped off an improbable run on Sunday by winning its first Big West Championship title since 2009 with a 4-2 win over No. 3 seed Pacific.

The Gauchos had a disappointing end to the regular season, losing three games in a row and five out of their last six and entered Big West Tournament as the No. 5 seed. However, the win-or-go-home atmosphere brought out the best in the Gauchos as they took down Hawaii, top-seeded UC Irvine and Pacific to become the first No. 5 seed to win the Big West Tournament.

UCSB got off to a great start in the tournament by knocking off No. 4 seed Hawaii in the opening round. After securing the doubles point, junior Axel Bouillin and sophomore Ziad Sultan won their singles matches to stretch the Gaucho lead. Junior Sasha Gryaznov then clinched the match for the Gauchos by beating Nils Schumann 1-6, 6-4, 6-2.

The 4-2 win over Hawaii advanced the Gauchos to the semifinals and a meeting with No. 1 seed UC Irvine, who had only lost one conference match all season.

However, UCSB was not intimidated by the top-seeded Anteaters and made quick work of them in a dominant 4-1 win on Saturday.

The Gauchos again secured the early doubles point, and Sultan extended the team’s lead to 2-0 with a 6-0, 6-0 dismantling of Reo Asami.

Gryaznov defeated Jonathan Hammel in straight sets 6-3, 6-3 before senior Benjamin Recknagel clinched the Gauchos’ berth in the conference finals against Pacific with a tough 6-3, 3-6, 6-3 win over Tyler Pham.

Against the Tigers, UCSB again won the doubles competition to gain an early 1-0 lead.

Recknagel then doubled the Gauchos lead by defeating Alex Golding in straight sets 6-2, 6-2. Shortly thereafter Ben Mirkin cut the Gaucho lead in half by taking down Gryaznov 6-1, 6-4.

However, freshman Jacob Johnson regained the lead for the Gauchos with an intense 7-5, 4-6, 6-0 win over Alex Hamilton.

Even more important, the conference championship secures an automatic bid for the Gauchos in the NCAA Tournament.

The Gauchos, who improved their overall record to 12-13, now await their seed for the NCAA Tournament that begins on May 10. 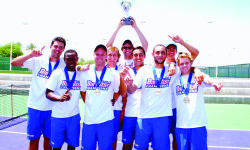 A version of this article appeared on page 6 of April 29, 2013’s print edition of The Daily Nexus.

Photo courtesy of The Big West.